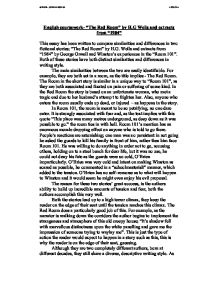 Compare similarities and differences in two fictional stories; &quot;The Red Room&quot; by H.G. Wells and extracts from &quot;1984&quot; by George Orwell and Winston's experiences in the &quot;Room 101&quot;.

English coursework- "The Red Room" by H.G Wells and extracts from "1984" This essay has been written to compare similarities and differences in two fictional stories; "The Red Room" by H.G. Wells and extracts from "1984" by George Orwell and Winston's experiences in the "Room 101". Both of these stories have both distinct similarities and differences in writing style. The main similarities between the two are easily identifiable. For example, they are both set in a room, as the title implies- The Red Room. The Room in the short story is similar in a unique way to "Room 101", as they are both associated and fixated on pain or suffering of some kind. In the Red Room the story is based on an unfortunate woman, who met a tragic end due to her husband's attempt to frighten her. Also, anyone who enters the room usually ends up dead, or injured - as happens in the story. In Room 101, the room is meant to be so petrifying, no one dare enter. It is strongly associated with fear and, as the text implies with this quote "This place was many metres underground, as deep down as it was possible to go." ...read more.

It may be burial alive or death by fire, or by drowning, or impalement, or fifty other deaths." This sentence structure alone prolongs the fear and stresses it, using descriptive lists. The purpose to this tension is to keep the reader alert. Small pauses during the texts of the story "The Red Room" also have the same effect, like if a shadow is spotted or a door creaking. This all builds up to that climaxing point of when the Red Room is entered, and Winston's fear is going to be realised. The characters are used in a very well organised way, they all add to the tension/eerie effect. In "The Red Room", the "old" characters are referred to as their descriptive appearance, not by their names. The author has done this to keep a mysterious tension in the air. One example is "The man with the withered arm". Defections such as this make for a much more spooky atmosphere, as it is set in a large mansion, and that character is a stereotypical image of who might live in that type of sinister house. In "1984", the guards are not referred to with their names by the author. They are simply called "guards" or "officers". ...read more.

While there a far less important differences between the two stories then similarities, there are still some easily identifiable differences between the two authors' writing. Firstly, Winston is not alone in the room 101, with a guard and mainly the imposing O'Brien acting in the scene. Whereas in the red room the narrator was the single person who entered. The difference between the two is that in the Red Room, a different category of fear is introduced, with the narrator being the only person it makes for an exasperating "being alone" type of horror, not knowing what is lurking. So in the Room 101, there are people, this makes a fear where the victim does not know how or when something will inflict upon him, but he knows it will. The twist of the fear is also a large difference; in "The Red Room" the fear is of something in the mind. The mind's pressure believes it to be something supernatural, when really fear itself was defeating it, and this was the real twist in the story - that fear can break down a person's mind. The Room 101's fear is that of something real, a natural fear that cannot be overcome despite what he may try (rats in Winston's case). Therefore again pushing his mind to all fearful conclusions. "The Red Room" was set in the present, yet "1984" is set in the future. ...read more.