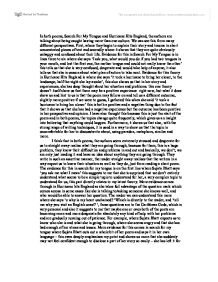 Compare Sujata Bhatt's Search for my tongue poem, with Grace Nichols' Hurricane Hits England, and decide whether or not having one or more culture can be a positive experience.

In both poems, Search For My Tongue and Hurricane Hits England, the authors are talking about being caught having more than one culture. We can see this from many different perspectives. First, where they begin to explain their story and trauma in short concentrated pieces of text and secondly where it shows that they are quite obviously unhappy and confused about their life. Evidence for this in Search For My Tongue is in lines three to six where she says 'I ask you, what would you do if you had two tongues in your mouth, and lost the first one, the mother tongue and could not really know the other' this tells us that she is very confused, desperate and would take help of anyone, it also tells us that she is unsure about what plan of action to take next. Evidence for this theory in Hurricane Hits England is where she says 'it took a hurricane to bring her closer, to the landscape, half the night she lay awake', this also shows us that in her story and experiences, she has deep thought about her situation and problems. this one theory doesn't itself show us that there may be a positive experience right now, but what it does show us and hint to us is that the poem may follow on and tell us a different outcome, slightly more positive if we were to guess, I gathered this when she said 'it took ...read more.

both of the poets are becoming more and more desperate for absolutely any kind of help with her problems and are gradually running out of patience. For example, where Sujata Bhatt expects us to know who she is and what she is going through, where she seems angry and that she has had enough of her stress and issues. More evidence for this comes in search for my tongue where Sujata Bhatt cuts out a whole bit of her poem and says it in her own language - this even deeply emphasises my point and shows us more that she suddenly may not feel confident enough to disclose a part of her story so easily - she has left it for us to work out ourselves. The other reason could be that she is, as said before, worn out, tired, upset, angry and has totally had enough of everything. I think in both poems the authors use metaphorical speech for effects and slightly also to hide their most uncomfortable topics with fantasy like ideas and conclusions (by putting human like features into plants and trees etcetera). The evidence for this in search for my tongue is where Sujata Bhatt uses her language and culture as her tongue and explains her 'tongue' with adjectives most known used to describe plants; the evidence is 'your mother tongue would rot, rot and die in your mouth, grows moist, grows strong veins, the bud opens, it blossoms out of my mouth', this shows how many uses she has for metaphorical speech In her poem. ...read more.

So not only has the experiences the authors have gone through made them feel confused and worried, happy and relieved, but it has left them feeling confident and open. Evidence for this in search for my tongue is 'It grows back, a stump of a shoot grows longer, grows moist, grows strong veins' 'It blossoms out of my mouth.' This shows us how calm and collected Bhatt is while telling the end of her story. The evidence in hurricane hits England is, Ah, sweet mystery, Come to let me know, that the earth is the earth is the earth. This also shows us how calm and collected Nicholls is after telling her story In summary, I think that from the points I have made, it is starting to show some positivity as she is telling her story openly, but in a concealed way (which is very clever) (concealed way refers to using metaphorical speech). To conclude the whole answer of the poem I think that being caught between two cultures is mixed in positivity; I can see this from the points I have made, which link up and show us that it is very negative at the start of the poems and then slowly becomes positive as the poem goes on, at the start of the poem the authors give us a hint that it will become positive and so this develops the main structure of the poem. The poem then has an aim in our minds and we can decipher easily how to understand some aspects of the poem. ...read more.

This answer is in receipt of a question on how dual culture can be a positive experience. The question prescribes the poem 'Search For My Tongue' by Sujatta Bhatt, and the candidate has chosen an apt comparative poem, 'Hurricane Hits ...

This answer is in receipt of a question on how dual culture can be a positive experience. The question prescribes the poem 'Search For My Tongue' by Sujatta Bhatt, and the candidate has chosen an apt comparative poem, 'Hurricane Hits England', by Grace Nichols. The focus is extremely good, but a question mark is raised over the extent to which the analysis is wholly effective considering the lack of appropriate quoting. Nonetheless, there is a very good understanding of the emotions of the poets as they speak to the reader in their respective poems.

The poems selected lend themselves well to the question, and their is a good focus demonstrated throughout the answer, with the candidate identifying a number of poetic devices used to convey the positives about have dual nationality. I would argue though, that there is a lot said but very little proved. To focus more discreetly on what the question is specifically asking can be challenging, but it's where the most marks lie, and so a good level of understanding when it comes to structuring an analytical response is a prudent precaution. Use the PEE (Point, Evidence & Explanation) structure if you have trouble with this, because this answer would be so much better if there were quotes used as evidence from the poems as statements like this: "it is used in a way to show us that the topic is uncomfortable for her to discuss/write about, using paradox, metaphors, similes and more. (sic)" do not win any marks as it is barely even considered feature spotting - the candidate must provide evidence for each poetic device listed and analyse its effect on the reader and how well it conjures up thoughts that dual nationality can be a positive experience. This latter task is imperative, because the candidate must tie the analysis back to the question otherwise risk being marked down as being too general in their analysis.

The Quality of Written Communication is below average, but there are no moments where the candidates answer becomes ambiguous and a challenge to read. The main issues are the lack of care for the standards of objective, analytical writing, such as capitalising the words of the title of a published piece of writing and enclosing the title in inverted commas like so - 'Search For My Tongue' / 'Hurricane Hits England'. It is not acceptable to see "Search for my tongue" written as this is not adhering to the rules of Standard English. Elsewhere, there could be a greater range of more complex punctuation used as this greatly improves the confidence of the answer.