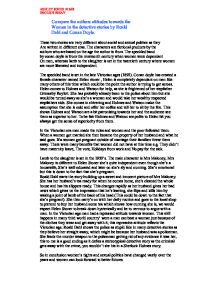 Compare the authors attitudes towards the Women in the detective stories by Roald Dahl and Conan Doyle.

ASHLEY JONES 10 MB ENGLISH ESSAY Compare the authors attitudes towards the Women in the detective stories by Roald Dahl and Conan Doyle. These two stories are very different about social and s****l politics as they Are written in different eras. The characters are fictional products by the authors who are based on the age the author is from. The speckled band by conan doyle is from the nineteenth century when women were dependant On men, whereas lamb to the slaughter is set in the twentieth century where women are more liberated and independent. The speckled band is set in the late Victorian ages (1892). Conan doyle has created a female character named Helen stoner , Helen is completely dependant on men like many others of this time which could be the point the author is trying to get across. ...read more.

In the Victorian era men made the rules and women and the poor followed them. When a women got married she then became the property of her husband and what he said goes. If a women got pregnant outside of marriage their families threw them away. There were many benefits that women did not have at this time e.g. They didn't have maternity leave, The vote, Holidays from work and No pay for the sick. Lamb to the slaughter is set in the 1950's. The main character is Mrs Maloney, Mrs Maloney is different to Helen Stoner she's quite independent even though she's a housewife, She's well educated and later on she's sly and cunning. ...read more.

In the Victorian age men had a repressed attitude towards women. This still happens in many third world country' were a man can beat a woman just because of the clothes they wear and get away with it, this repressive attitude reflects the Victorian age. Roald Dahl shows the police as stupid like in many detective stories as they believe her straight away, which might be because her husband was a policeman. She feeds the murder weapon to the policeman getting rid of any evidence it was her, this to me is a good ending as it defies a stereotypical detective story as the criminal gets away with the crime, you wouldn't she his in a Sherlock Holmes story. So in conclusion women's rights and s****l politics have changed vastly over the years and women can look forward to better futures. ...read more.