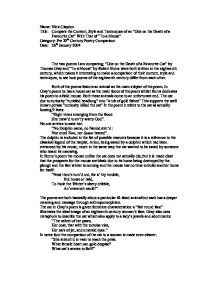 Compare the Content, Style and Techniques of an &quot;Ode on the Death of a Favourite Cat&quot; With That of &quot;To a Mouse&quot;.

Name: Nick Claydon Title: Compare the Content, Style and Techniques of an "Ode on the Death of a Favourite Cat" With That of "To a Mouse" Category: Pre 20th Century Poetry Comparison Date: 26th January 2004 The two poems I am comparing; "Ode on the Death of a Favourite Cat" by Thomas Gray and "To a Mouse" by Robert Burns were both written in the eighteenth century, which makes it interesting to make a comparison of their content, style and techniques, to see how poems of the eighteenth century differ from each other. Both of the poems feature an animal as the main subject of the poem. In Gray's poem he has a house cat as the main focus of the poem whilst Burns dedicates his poem to a field mouse. Both these animals come to an unfortunate end. The cat due to curiosity "tumbled headlong" into "a tub of gold fishes" This supports the well known phrase "curiosity killed the cat" In the poem it refers to the cat as actually loosing 9 lives: "Eight times emerging from the flood She mew'd to ev'ry watry God". ...read more.

The anthropomorphism continues in verses 5 and 7: "Presumptious maid" and "From hence you Beauties, undeceiv'd Know one false step is ne'er retrieved". The last lines of the poem contain a moral: "Not all that tempts your wand'ring eyes And heedless hearts, is lawful prize; Nor all that glisters gold". Through the cat Gray created a cautionary tale specifically aimed at women. It's a warning not to be tempted by what is not rightly theirs, and not to be seduced by glittering appearances because it may not be as good as it looks on the outside. Gray is very direct with his message of warning to women but he writes in a light-hearted way throughout. However, Burn's poem is much more serious and sombre. He uses anthropomorphism like Gray to get his message across through an animal, in this case the mouse is used to highlight the social and moral problems that he felt existed in both the public and in his own family - His father died after eighteen years of hard work as a farmer. ...read more.

Gray did this by creating his poem in an ode form. Odes are usually serious poems whereas Gray did one about the death of a cat drowned in a goldfish bowl! He also uses formal classical language and illustrations appropriate for a serious subject. Burns has no humour or mockery in his poem it is very serious. He does not use the ode form or any formal classical language. Instead it is written mostly in a Scottish dialect except for verses 2 and 7 where he uses plain English to highlight his points of the mouse's home being destroyed and his moral that good plans for the future often go wrong. In each poem they use a regular rhyming scheme but both follow different patterns. Both of the poems are fairly gloomy in their outcome, each with a message of caution to the reader. However they are different in the fact that in Gray's poem has some light-heartedness in the shape of humour and mockery, whereas Burn's poem is more gloomy and leaves the reader thinking that they, like the mouse have no good prospects for the future, if all good plans go wrong as Burns believes in his poem. ...read more.