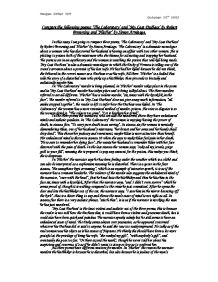 Compare the following poems: 'The Laboratory' and 'My Last Duchess' by Robert Browning and 'Hitcher' by Simon Armitage.

After he opens the door and lets the hitchhiker out of the car, the narrator says, "I saw him in the mirror bouncing off the kerb", that is a bitter thing to say and shows the man's state of mind is not right at all. In stanza five there is a very s******c phrase, "stitch that", it is as if the narrator is mocking the man he has just murdered. 'My Last Duchess' is the least violent and s******c out of the three poems, this is because the reader is not told how the Duchess dies, it could have been a violent and gruesome death, but it could also have been quick and painless. The narrator speaks calmly but he still seems to have an unbalanced state of mind. The Duke seems almost over possessive, as he appeared concerned whatever his Duchess did or said to anyone, he said she was too easily impressed. He talks as if the real woman was his object as is his statue of Neptune. He thinks she should have been a lot more grateful at the privilege of being his wife, "she ranked my gift", "with anybody's gift", and eventually she goes too far. "Or there exceed the mark", though he never told her about his suspicions and concerns, it's as if he didn't want to stoop so low as to confront her. ...read more.

The tone in this poem is also very matter-of-fact and no emotion is shown on the narrator's behalf. 'The Laboratory also uses rhyming couplets throughout, onomatopoeias, "pound at thy powder" and hyperboles, "the exquisite blue". The diction in this poem suggests excitement, corruption, envy, betrayal, suspicion, anger and revenge. The tone in this poem is My favourite of the three poems was 'Hitcher' by Simon Armitage because I thought the story portrayed was more interesting and the comparisons within the poem were very affective, for example the calm, lyrical tone in stanza two then the violence in stanza four. I didn't find 'My Last Duchess' very appealing because I didn't find the theme and ideas in the poem very exciting. In 'The Laboratory' I liked the idea of the woman being in the apothecary watching the poison being made, as she was able to use it as an excuse to vary the subject topic. E.g. she spoke in stanza one about the poison, "the poison to poison her", then, in stanza two about why she was there, "he is with her". From my study of the three poems and this essay I have discovered that although all three poems have different ideas, motives and are narrated by different people, they also have many similarities. They all have the theme of murder and all the narrators are sadists, jealousy, revenge and the unbalanced minds of the narrator's feature in all three poems. Imogen Offer 10T October 10th 2003 ...read more.