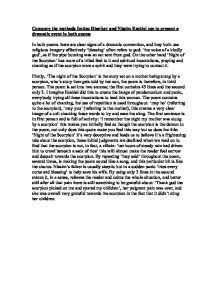 Compare the methods Imtiaz Dharker and Nissim Ezekiel use to present a dramatic event in both poems In both poems there are clear signs of a dramatic convention, and they both use religious imagery effectively 'blessing' often refers to god: 'the voice of a kindly god', as if the pipe bursting was an act sent from god. On the other hand 'Night of the Scorpion' has more of a tribal feel to it and spiritual incantations, praying and chanting as if the scorpion were a spirit and they were trying to contact it. Firstly, 'The night of the Scorpion' is the story set on a mother being stung by a scorpion, who's story then gets told by her son, the poem is therefore, in third person. The poem is set into two stanzas; the first contains 45 lines and the second only 3. ...read more.

villain: 'ten hours of steady rain had driven him to crawl beneath a sack of rice' this will almost make the reader feel sorrow and despair towards the scorpion. By repeating 'they said' throughout the poem, several times, is making the poem sound like a song, and this particular bit is like the chorus. Nissim's father is usually skeptic but in a sudden panic 'tries every curse and blessing' to help save his wife. By using only 3 lines in the second stanza it, in a sense, relieves the reader and calms the whole situation, and better still after all that pain there is still something to be grateful about: 'Thank god the scorpion picked on me and spared my children', her poignant pain was over, and she was overall very grateful towards the scorpion in the fact that it didn't sting her children. ...read more.

In the 2nd stanza the water is compared to being a god like substance, and is obviously not a common this in this poverty ridden community. The third stanza is the longest, and refers to the entire communities reaction rather that a single group or person. There is also a use of alliteration on line 10: 'flow has found' this is quite soft and relaxing to say, as if it's reflecting the ambience the poem is projecting. The forth and final stanza focuses on the children's reaction alone, they are na�ve and don't realize the significance of this rare occurrence, they just generally play and have fun while the adults scrap around for pots and pans. Yet again there is another use of alliteration in this stanza: 'polished to perfection', this small quote makes the last few sentences slow down as the poem comes to an end. Overall both poems use a range of techniques to involve the reader and both dramatize the opposing events to the max. ...read more.