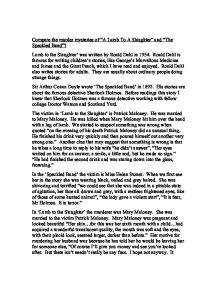 Compare the murder mysteries of "A Lamb To A Slaughter" and "The Speckled Band"? Lamb to the Slaughter' was written by Roald Dahl in 1954. Roald Dahl is famous for writing children's stories, like George's Marvellous Medicine and James and the Giant Peach, which I have read and enjoyed. Roald Dahl also writes stories for adults. They are usually about ordinary people doing strange things. Sir Arthur Conan Doyle wrote 'The Speckled Band' in 1892. His stories are about the famous detective Sherlock Holmes. Before readings this story I knew that Sherlock Holmes was a famous detective working with fellow college Doctor Watson and Scotland Yard. The victim in 'Lamb to the Slaughter' is Patrick Maloney. He was married to Mary Maloney. He was killed when Mary Maloney hit him over the head with a leg of lamb. We started to suspect something was wrong when quoted "on the evening of his death Patrick Maloney did an unusual thing. He finished his drink very quickly and then poured himself out another very strong one." Another clue that may suggest that something is wrong is that he takes a long time to reply to his wife "he didn't answer", "Her eyes waited on him for an answer, a smile, a little nod, but he made no sign." ...read more.

The house is described as "The building was of grey, lichen - blotched stone, with a high central portion and two curving wings, like the claws of a crab, thrown out on each side. In one of these wings the windows were broken and blocked with wooden boards, while the roof was partly caved in, a picture of ruin." This creates a spooky and scary atmosphere. The atmosphere makes me feel very cautious because it's a typical description of a haunted house where anything could suddenly happen. You could relate this atmosphere to a typical atmosphere of a murder mystery. To add to the atmosphere or fear and horror were both a baboon and cheetah in the house. In 'Lamb to the Slaughter' the detective did not suspect Mary Maloney, put pressure on her, they didn't make her leave the room, suspect a women and didn't solve the crime. These were things, which they should have done. Things they did do which they should have done were discussing the crime with Mary, drinking, eating on duty and eating the evidence. The detectives were very sloppy with the investigation " she could hear them speaking among themselves, their voices thick and sloppy." This has a double meaning about the detectives and their investigation. They were thick because they ate the evidence and they ran a sloppy case. ...read more.

See here." 'The Speckled Band' is set in Victorian times. We know this because it uses old -fashioned language, difficult words; women wore long dresses and gloves. We also know this because dogcarts were around in this time. "There is no dog cart which throws up mud in that way". You can tell the 'Lamb to the Slaughter' is set in the 50's because the language used is modern. In the story there is also a car "tyres on the gravel outside", and a thermos bucket "Fresh ice in the Thermos Bucket." They both show that the story was set in the 1980's. I don't think it is unusual that there are no female detectives because both before and after the 1900's and during half of the 20th centaury women were only thought of as house wives and who only listen to their father who would have no say in anything. 'The Speckled Band' because it went into detail with the investigation, unlike 'Lamb to the Slaughter' which was a snappy story and a quick investigation. Even though the language is more old fashioned then the language used in 'Lamb to the Slaughter' I found it more enjoyable. Both stories had unconventional endings that I liked and made both stories more interesting. People will always like to read Murder Mysteries because they are interesting and they make you think about what will happen, and you have to work things out using clues that you have been given. ...read more.