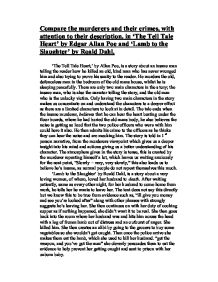 Compare the murderers and their crimes, with attention to their description, in 'The Tell Tale Heart' by Edgar Allan Poe and 'Lamb to the Slaughter' by Roald Dahl.

Compare the murderers and their crimes, with attention to their description, in 'The Tell Tale Heart' by Edgar Allan Poe and 'Lamb to the Slaughter' by Roald Dahl. 'The Tell Tale Heart,' by Allan Poe, is a story about an insane man telling the reader how he killed an old, kind man who has never wronged him and also trying to prove his sanity to the reader. He murders the old, defenceless man in the bedroom of the old mans house, whilst he is sleeping peacefully. There are only two main characters in the story; the insane man, who is also the narrator telling the story, and the old man who is the unlucky victim. Only having two main characters in the story makes us concentrate on and understand the characters to a deeper effect as there are a limited characters to look at in detail. The tale ends when the insane murderer, believes that he can hear the heart beating under the floor boards, where he had buried the old mans body, he also believes the noise is getting so loud that the two police officers who were with him could here it also. ...read more.

She then continues on with her duty of cooking supper as if nothing happened, she didn't want it to be real. She then goes back into the room where her husband was and hits him across the head with a leg of frozen lamb out of distress and an outburst of anger. She killed him. She then creates an alibi by going to the grocers to buy some vegetables so she wouldn't get caught. Then once the police arrive she makes them eat the lamb, which she used to kill her husband. "get the weapon, and you've got the man" she cleverly persuades them to eat the evidence to help prevent her getting caught and sent to prison with her unborn baby. The murder takes place in the front room of their house, where they may of shared many happy memories together as a married couple. There are again, only two main characters in the story, Mary and Patrick Maloney, husband and wife. The story is told in 3rd person narrative and the atmosphere created is empathy and despair as at first all that is mentioned is ...read more.

a normal, sane person would not spend an hour just to poke their head around a door, yet the murderer believes it be normal and wise, thus further suggesting his madness. He has no motive to kill his victim, even after the crime is committed he is still unsure about his motive, searching for it, "I think it was his eye! Yes, it was this!" after stating, "I loved the old man. He had never wronged me. He had never given me insult. For his gold I had no desire." He says he loves the old man, yet kills him for his evil eye. This speaks for its self, the murderer is a madman. He spends hours getting into the old mans room, being extremely careful. Then attacks the old man in an act of distress and anxiety. "with a loud yell, I threw open the lantern and leaped into the room." All his slow, and careful build up was relatively pointless, his stealthy actions and careful movements may have suggested that he was not mad, but wise, but what wise man would go through all that preparation and then just leap into an attack? Only a madman would do this. ...read more.