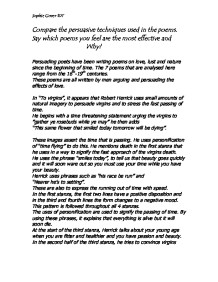 Compare the persuasive techniques used in the poems. Say which poems you feel are the most effective and Why?

Compare the persuasive techniques used in the poems. Say which poems you feel are the most effective and Why? Persuading poets have been writing poems on love, l**t and nature since the beginning of time. The 7 poems that are analysed here range from the 16th-19th centuries. These poems are all written by men arguing and persuading the effects of love. In "To virgins", it appears that Robert Herrick uses small amounts of natural imagery to persuade virgins and to stress the fast passing of time. He begins with a time threatening statement urging the virgins to "gather ye rosebuds while ye may" he then adds "This same flower that smiled today tomorrow will be dying". These images assert the time that is passing. He uses personification of "time flying" to do this. He mentions death in the first stanza that he uses in a way to signify the fast approach of the virgins death. He uses the phrase "smiles today", to tell us that beauty goes quickly and it will soon ware out so you must use your time while you have your beauty. Herrick uses phrases such as "his race be run" and "Nearer he's to setting". ...read more.

From the language in this poem, Marvell sounds like he is confident and is very manipulative and threatening and also very desperate. This poem compares well to Herrick's "To Virgins" because they both a very threatening and commanding making the writers sound very desperate. They also both express time a lot as this adds to the effect of desperation. The fourth poem, "Loves Philosophy" by Percy Bysshe Shelley is another threatening and persuading love poem. The poem begins with "The fountains mingle with the river" This is personification that is used a lot throughout the poems two stanzas. "The winds of heaven mix for ever with a sweet emotion;" Throughout the poem Shelley uses personification to imply that everything in the world has a partner and that nothing is single. He claims that he feels very lonely because he is the only thing in the world without any love. The second stanza also contains a lot of personification. Its opening phrase is "see the mountains kiss high heaven and the waves clasp one another;" Shelley uses personification to explain that even nature has partners. The imagery used is also natural images that correspond with the personification. ""And the sunlight kiss the earth, and the moonbeams kiss the sea:" The poem ends on a strong phrase which helps to persuade ...read more.

Throughout the first two stanzas, the poet is trying to stress that the flea has done it so why can't they! The third stanza changes the mood of the poem. From the first two lines you can see that she has killed the flea. He uses this to set her up as part of a guilt trip. The third stanza argues that the flea is dead but she has not changed in any way at all even after a murder. From this he is trying to state that being with him wont change anything either. This poem can compare well to "To his coy mistress" by Andrew Marvell. These poems share similarities in the way that they both have three sections split up into stanzas. The first, which argues the subject. The second, which stresses consequences and a third stanza that explains a persuading alternative. In my opinion, the most effective poem is "The Flea". This is because I think the way that Donne has set up his subject is more persuading than the others and also makes it a more interesting poem. I feel that "To his mistress going to bed" by John Donne was the least successful because it is not very persuading because of the urgency in the mood of the poem. It contains no love phrases and is a poem about l**t and revelation that contributes to it being very threatening. Sophie Gover 10T ...read more.