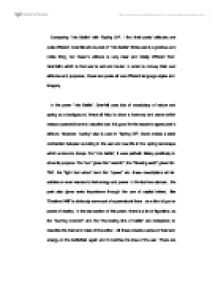 Comparing "Into Battle" with "Spring Off", I find their poets' attitudes are quite different. Grenfell who is poet of "Into Battle" thinks war is a glorious and noble thing, but Owen's attitude is very clear and totally different from Grenfell's which is that war is evil and brutal. In order to convey their own attitudes and purposes, these two poets all use different language styles and imagery. In the poem "Into Battle", Grenfell uses lots of vocabulary of nature and spring as a background, these all help to show a harmony and sense which crease a peaceful tone to describe war, it is good for the reader to agree poet's attitude. ...read more.

these descriptions all let soldiers or even readers to feel energy and power. In the last two stanzas, the poet also gives extra importance through the use of capital letters, like "Destined Will" is obviously some sort of supernatural force, as a kind of god or power of destiny. In the last section of this poem, there is a lot of figurative, as the "burning moment" and the "thundering line of battle" are metaphors to describe the heat and noise of the action. All these create a sense of heat and energy on the battlefield again and it matches his idea of the war. ...read more.

However, Owen uses "but" and shorter, sharper sounds of "stood still" and "stark blank sky" to creates contrast immediately. In "Spring Off", Owen uses rhetorical question to ask why the survivors don not speak of their dead comrades and talk of their glorious death and convey the massage of the poem which is that there is no glory in this war. These two poems all use natural elements in the poem to express their attitudes of war. Because of different attitudes, I can see that "Spring Off" is described in a negative way, and Julian writes "Into Battle" positively. Therefore, it makes two poems' style and language and purpose all different. ?? ?? ?? ?? ...read more.