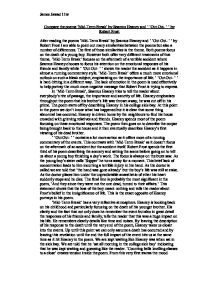 Compare the poems 'Mid-Term Break' by Seamus Heaney and ' 'Out Out- ' ' by Robert Frost After reading the poems 'Mid-Term Break' by Seamus Heaney and ' 'Out Out- ' ' by Robert Frost I am able to point out many similarities between the poems but also a number of differences. The first of these similarities is the theme. Both poems focus on the death of a young boy. However both offer very different treatments of that theme. 'Mid-Term Break' focuses on the aftermath of a terrible accident where Seamus Heaney chooses to focus his attention on the emotional responses of his friends and family while ' 'Out Out- ' ' shows the reader the accident as it happens in almost a running commentary style. 'Mid-Term Break' offers a much more emotional outlook on such a bleak subject, emphasising on the importance of life. ' 'Out Out- ' ' is hard-hitting in a different way. The lack of emotion in the poem is used effectively to help portray the much more negative message that Robert Frost is trying to express. In 'Mid-Term Break', Seamus Heaney tries to tell the reader about everybody's rite of passage, the importance and sanctity of life. Heaney emphasises throughout the poem that his brother's life was thrown away, he was cut off in his prime. The poem starts off by describing Heaney in his college sick-bay. At this point in the poem we don't know what has happened but it is clear that some thing abnormal has occurred. Heaney is driven home by the neighbours to find his house crowded with grieving relatives and friends. Heaney spends most of the poem focusing on these emotional responses. The poem then goes on to describe the corpse being brought back to the house and it then eventually describes Heaney's first viewing of his dead brother. ' 'Out Out- ' ' contains a lot more action as it offers more of a running commentary of the events. ...read more.

He remembers precisely when these events happened. The constant reminder of the time also gives a sense of the length of that day and the waiting Heaney and his family incurred. The reader is also kept waiting to see what exactly has happened. There is clearly a rising tension as they await the arrival of the body. This is made clear when Heaney makes reference to him as 'the corpse'. Death has changed his brother, he is no longer 'real'. It is as if what is returned is not Heaney's brother. Heaney clearly keeps a distance. He has not, at this point in the poem, accepted the reality of what has happened. Heaney's youth and inexperience of the subject is shown by his anxiety and also because he waits until the next morning to see the body. There is a sense of death separating. Time is used again to show this. 'The next morning'. That morning arrives for Heaney but not for his brother. His brother's time stopped on the day of the accident. As Heaney looks back as an adult he is older, his brother is not. In the final line 'four foot box, a foot for every year', time is used again to help describe the incident. In the final two stanzas of the poem Heaney faces his fears and views the body. The whole atmosphere is softened by Heaney' relief at what he sees. He sees his brother more as a frozen image that is not frightening. 'He lay in the four foot box as if in his cot', although he looks as if he is sleeping the shocking difference of the 'four foot box' is also noted. 'Snowdrops and candles soothed the bedside', Heaney is trying to give the reader the same small sense of relief that he had. Snowdrops are small, white and cold symbolising his brother. Snowdrops are also symbolic of a dead child. ...read more.

It is a quotation from Macbeth's soliloquy, Act 5 Scene 5. It has a very philosophical message about the insignificance of life, which is exactly the message Frost wants to portray. In the soliloquy, Macbeth reflects on the fact that life and endeavours have lead to nothing. His speech ends on the word nothing, which is very significance as Frost is trying to show the unimportance of life. Macbeth says that 'life is a tale told by an idiot full of sound and fury signifying nothing'. This is negative evaluation of human life that Frost also believes in. In the soliloquy life is also symbolised by a candle, which is easily extinguished, lacks substance and is fragile, vulnerable and transient. The boy's life in the poem was blown out just like a candle. At first glance both poems seem to be very similar but after reading the poems the differences are very clear. ' 'Out Out- ' ' offers a more philosophical viewpoint but lacks the emotion of 'Mid-Term Break'. Although the poems share a similar theme they offer very different points of view. Heaney tries to express the importance of life while Frost does the very opposite. I think that both poems are very successful in achieving what they aimed to achieve. I prefer ' 'Out Out- ' ' by Robert Frost because I think that is point of view is unusual and interesting. I also liked his more philosophical approach. Frost seems to be answering the question 'What is the meaning of life?' People usually turn to religion for an answer but Robert Frost has found one within himself. Although I do not agree with his bleak outlook I did find his opinion more interesting. I also enjoyed seeing the action in the poem rather than just the aftermath and I thought it was interesting to see the events develop as they happened. ' 'Out Out- ' ' was a more unusual poem and I think that Robert Frost took a more abnormal and therefore interesting approach to writing it. ?? ?? ?? ?? James Jawad 11w ...read more.

A valid and well-reasoned response to the given question. This candidate discusses the tragedy of both poems, notably Heaney's sense of loss and grief within 'Mid-term Break' which they link to Frost's poem effectively. Ultimately, they provide a good response ...

A valid and well-reasoned response to the given question. This candidate discusses the tragedy of both poems, notably Heaney's sense of loss and grief within 'Mid-term Break' which they link to Frost's poem effectively. Ultimately, they provide a good response to the set question.

Reasonably high with various examples of poetic techniques being evaluated by this candidate. Would like to see greater depth of analysis, for example, how exactly does Heaney create this melancholy tone? This is crucial to the poem and mood and atmosphere should be addressed further.

Perfectly fine. Sound spelling, punctuation and grammar as is expected at this level. This candidate's sentence and overall essay structure are both good.