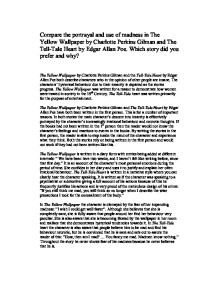 Compare the portrayal and use of madness in The Yellow Wallpaper by Charlotte Perkins Gilman and The Tell-Tale Heart by Edgar Allan Poe. Which story did you prefer and why

Although she does demonstrate irrational behaviour and it is due to her insanity, she is aware of the fact that other people find this type of behaviour unusual. This is shown when she says: "I always lock the door when I creep by daylight. I can't do it at night, for I know John would suspect something at once.". The man's behaviour in The Tell-Tale Heart in response to his irrational phobia is very extreme but he too is aware that people find his actions neurotic. It is clear that the murder he commits is not the only irrational thing he has done due to his madness because he talks about the fact that he was ill and he knows that people use his illness as an excuse for his previous behaviour. Instead of using it as an excuse he reassures the reader that in fact it heightened his senses: "The disease had sharpened my senses - not destroyed - not dulled them." he uses this as an excuse because his senses were so acute that he could hear the beating of the dead man's heart. In both stories, the characters also show obsessive tendencies towards objects. ...read more.

The language used to describe the systematic chopping up of the corpse is very powerful and cold. Throughout the story the author particularly uses language repetition, the best example of this is when the man hears the heart beating, "...but the noise arose over all and continually increased. It grew louder - louder - louder!" The two stories were written for two very different reasons, The Tell-Tale Heart was written for the sole purpose of entertainment, whilst The Yellow Wallpaper written for political reasons. Charlotte Perkins Gilman wrote her story to demonstrate the woman's place in society in the 19th Century. Both stories capture the imagination and hold the reader's attention through use of the first person. The climax in each story is very different and powerful as well as unexpected. On a personal level I preferred The Tell-Tale Heart for the following reasons. Firstly I found the woman's account in The Yellow Wallpaper, although interesting, a little too emotional and personal to feel comfortable for me to relate to. This may be a gender response. On the other hand, I found that I could relate more easily to the dramatic qualities in The Tell-Tale Heart and the progress towards the final denouement better captured my imagination. This story also felt more timeless which makes it far easier to relate to. ...read more.