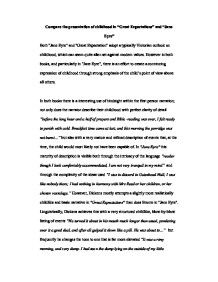 Compare the presentation of childhood in

Compare the presentation of childhood in "Great Expectations" and "Jane Eyre" Both "Jane Eyre" and "Great Expectation" adopt a typically Victorian outlook on childhood, which can seem quite alien set against modern values. However in both books, and particularly in "Jane Eyre", there is an effort to create a convincing expression of childhood through strong emphasis of the child's point of view above all others. In both books there is a interesting use of hindsight within the first person narration; not only does the narrator describe their childhood with perfect clarity of detail "before the long hour and a half of prayers and Bible-reading was over, I felt ready to perish with cold. Breakfast time came at last, and this morning the porridge was not burnt..." but also with a very mature and refined description of events that, at the time, the child would most likely not have been capable of. In "Jane Eyre" this maturity of description is visible both through the intricacy of the language "reader though I look comfortably accommodated, I am not very tranquil in my mind" and through the complexity of the ideas used "I was in discord in Gateshead Hall; I was like nobody there; I had nothing in harmony with Mrs Reed or her children, or her chosen vassalage." However, Dickens mostly attempts a slightly more realistically childlike and basic narrative in "Great Expectations" than does Bronte in "Jane Eyre". Linguistically, Dickens achieves this with a very structured childlike, blow-by-blow listing of events "He turned it about in his mouth much longer than usual, pondering over it a good deal, and after all gulped it down like a pill. ...read more.

Another obvious parallel between each book can be found within orphaned status of Jane and Pip They were both brought up grudgingly by relatives; in the case of Pip it is 'By hand' of his oppressive sister, and for Jane it is by the loveless and uncaring Mrs Reed at Gatehouse manor, where she is seen as nothing more than a worthless 'dependant'. The idea of family and identity are important themes in each novel, with an air of mysticism surrounding the origins of Pip and Jane: the dying wish of Jane's father that she should be taken care of by Mrs Reed and the fact that Pip's sister was charged with his upbringing, contributes to some of this mysticism. Jane and Pip are both mistreated by those charged with a duty of care to them, and there are some salient similarities between their situations. Whilst Jane remains at Gateshead she is "trodden on severely" by her antagonist Mrs Reed however she is not completely without hope or companionship; Bessie her young nursemaid is judicious on the side of her mistress but still shows compassion towards Jane "I don't dislike you, miss; I believe I am fonder of you than all the others." Jane goes through a major upheaval quite early in her life and is so freed from the oppression at Gateshead manor, which she so despises "Good-bye to Gateshead!" is her somewhat joyous exclamation as she is moved to Lowood School. However this is not to say she does not endure hardship or encounter injustice at Lowood, but there she also finds friends, when at Gateshead she had none. ...read more.

The 'Great Expectations' of both Pip and Jane here contrast significantly, which represents a feminist message from Bronte, and a moral one from Dickens. Jane is a talented and able woman, but despite her skills (surpassing that of many men), the constraints of her period mean that the highest office she can expect to fill is that of governess of a house. Conversely, Pip can expect to be taught to be a gentleman and find wealth and happiness in London. As it happens, they are both wrong. In conclusion; neither books could be said to deal with childhood as a central theme, but inclusion of the protagonists' childhood as hefty sections of prose in each novel is a deliberate and necessary addition by the authors, serving the overall message of each text. Primarily children offer a perspective of innocence through which Dickens and Bronte can portray the adult world and its hypocrisy with a view untainted by the preconceptions and expectations of adults. Frequently this technique is used to the detriment of those less admirable adult characters (Mr Brocklehurst, Mr Wopsle, Mrs Reed, Mr Pumblechook, Mrs Gargery, and the list goes on), but it is also used to illuminate those good adult characters (Mr Joe, Mr Lloyd, Mrs Temple, and others). Also childhood is the first constituent of the identity of our protagonists. Pip's childhood is pivotal in the creation of his identity, which becomes so thematically important later in "Great Expectations". Also, Jane's moral conviction to honesty and justice can be traced back to her mistreatment in childhood, and knowing of her childhood allows the reader to see in context her later actions, and so her identity. Words: 2657 ...read more.