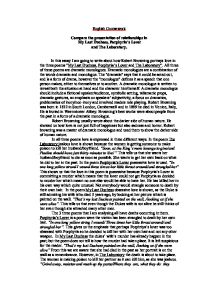 Compare the presentation of relationships in My Last Duchess, Porphyrias Lover and The Laboratory.

English Coursework Compare the presentation of relationships in My Last Duchess, Porphyria's Lover and The Laboratory. In this essay I am going to write about how Robert Browning portrays love in the three poems "My Last Duchess, Porphyria's Lover and The Laboratory". All three of these poems are dramatic monologues. Dramatic monologues are a combination of the words dramatic and monologue. The "dramatic" says that it could be acted out, and is a form of drama, however the "monologue" defines it as a speech that one person makes, either to themselves or to another. A dramatic monologue is written to reveal both the situation at hand and the character him/herself. A dramatic monologue should include a fictional speaker/audience, symbolic setting, talismanic props, dramatic gestures, an emphasis on speakers' subjectivity, a focus on dramatics, problematics of irony/non-irony and involved readers role playing. Robert Browning was born in 1812 in South London, Camberwell and in 1889 he died in Venice, Italy, He is buried in Westminster Abbey. Browning's best works were about people from the past in a form of a dramatic monologue. Robert Browning usually wrote about the darker side of human nature. ...read more.

The victim in the poem Porphyria's Lover is Porphyria who was strangled to death by her own "Yellow string hair". From the information in the poem we can tell that Porphyria is a woman who is lively and likes to party. "Which done, she rose, and from her form/ Withdrew the dripping cloak and shawl/And laid her soiled gloves by united/ And let her damp hair fall". This shows us that she just arrived back from a party and the weather outside was very bad. "The sullen wind was soon awake". The weather is described at the beginning of the poem as angry which enhances the reader to what the poem's atmosphere will be in the poem. Finally the victim in The Laboratory is being killed by poison which is made by the wife before the king's party. She wanted the poison to be done accurately so it did what it had to do which was to kill the man as she is jealous. "Quick----is it finished? The colour's too grim!" This gives tells us that she can not wait any longer, she is getting impatient. The use of colour provides emotion and gives the poem more of an upbeat and a clearer image. ...read more.

- I am here". This tells us that revenge is being plotted. Revenge is a dish best served cold, so they are waiting for the right moment. I think the way Robert Browning presented us the three poems was unusual but in style as he has not just used simple language but he has used many styles of languages to enhance the poems. I think that Robert Browning's way of showing obsessive, jealous and possessive love was good as he shows us that there are many types of love which are not considered when we usually think about love in a conventional manner. Each of the three poems: My Last Duchess, The Laboratory and Porphyria's Lover shows a different type of love. My Last Duchess shows obsessive love. The Laboratory shows us jealous love and Porphyria's Lover shows us possessive love. Love is a very strong matter and I think you should think very hard when you choose who you want to be with for the rest of your life or even if you just want to go out on a date with someone. Love is not always about sweets, chocolates and cuddly toys. From Robert Browning's poems it has come to my attention that even something sweet like love can lead to a something tragic like death. ?? ?? ?? ?? ...read more.