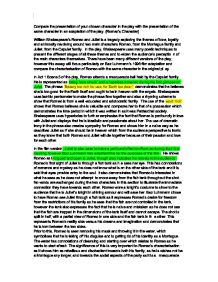 Compare the presentation of your chosen character in the play with the presentation of the same character in an adaptation of the play. (Romeo's Character) William Shakespeare's Romeo and Juliet is a tragedy exploring the themes of love, loyalty and animosity revolving around two main characters Romeo, from the Montague family and Juliet, from the Capulet family. In the play, Shakespeare uses many poetic techniques to present the different stages of all these themes and to widen the audience's perception of the main characters themselves. There have been many different versions of the play; however this essay will focus particularly on Baz Luhrmann's 1996 film adaptation and compare the characterisation of Romeo with the same character in the original play. In Act 1 Scene 5 of the play, Romeo attends a masquerade ball held by the Capulet family. He is represented as being 'love struck' and a hopeless romantic during his first glimpse of Juliet. The phrase 'Beauty too rich for use, for Earth too dear:' demonstrates that he believes she is too good for the Earth itself and ought to be in heaven with the angels. Shakespeare uses iambic pentameter to make the phrase flow together and also a rhyming scheme to show that Romeo is from a well-educated and aristocratic family. The use of the word 'rich' shows that Romeo believes she is valuable and compares her to that of a possession which demonstrates the time period in which it was written in as it was Patriarchal society. ...read more.

Romeo begins in straightforward iambic pentameter, with stresses regularly punctuating every other syllable. He also uses a metaphor to compare Juliet to the sun, showing that she is crucial to life itself as the world revolves around her. Shakespeare uses this quote as an implied stage direction to infer to the actors that for much of the scene, Romeo should be able to see Juliet, and is waiting for her arrival, but she should not be able to see him. This demonstrates to the audience that he is trespassing and putting himself in danger as both Juliet and her kinsmen are unaware of his presence. Throughout the scene there is no physical contact between the two performers, as Juliet would have been on a raised platform, to emphasise the fact that Romeo's love is not just skin deep. It also illustrates Romeo's passionate and romantic side as his soliloquys and sonnets are expressive enough to emit his love to Juliet. The extract 'The exchange of love's faithful vow for mine.' determines the absolute haste with which Romeo is willing to act as he had met Juliet for the first time just a few hours before. The extract is an example of a prose and so stands out to the audience. This shows that Romeo is both eager to marry his love, however is also impatient. It is this impatience and haste that will lead to their ultimate downfalls and their deaths. ...read more.

anyone get in his way, however also illustrates that he is not aware of the consequences of his actions towards both himself and others. The producer uses an aerial shot to film the scene as it gives the audience a full overhead view and also reinforces the intertextuality in the scene. Luhrmann decides to place Juliet's body in a church surrounded by hundreds of burning candles compared with that of the tomb in Shakespeare's original play to emphasise the link between religion and the two main characters in the film. A panning shot was used to show Juliet's body to emphasise the shock of what Romeo witnesses in the church. In this scene Romeo and Juliet are alone which displays that to Romeo, Juliet was the only person that mattered to him. Overall both William Shakespeare and Baz Luhrmann use specific techniques to represent Romeo through many different emotional stages, however the ways in which they communicate these attitudes differ throughout both the play and adaptation. Baz Luhrmann chooses to use many contemporary techniques via costume, props and filming methods to update the play and make Romeo seem more modernised, whereas William Shakespeare portrays Romeo through language techniques such as soliloquys and sonnets to emphasise his romantic side and show that his love is not just skin deep. Both types of techniques are very effective in the characterisation of Romeo to the audience and are able to communicate the depth of feeling and emotion from his point of view. ?? ?? ?? ?? - http://www.docx-to-doc-converter.com ...read more.