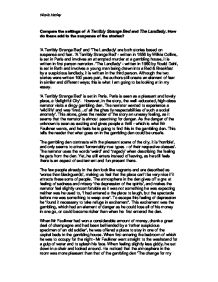 Compare the settings of A Terribly Strange Bed and The Landlady. How do these add to the suspense of the stories?

Compare the settings of A Terribly Strange Bed and The Landlady. How do these add to the suspense of the stories? 'A Terribly Strange Bed' and 'The Landlady' are both stories based on suspense and fear. 'A Terribly Strange Bed'- written in 1856 by Wilkie Collins, is set in Paris and involves an attempted murder at a gambling house, it is written in first person narration. 'The Landlady'- written in 1960 by Roald Dahl, is set in Bath and involves a young man being drawn into a Bed & Breakfast by a suspicious landlady, it is written in the third person. Although the two stories were written 100 years part, the authors still create an element of fear in similar and different ways; this is what I am going to be looking at in my essay. 'A Terribly Strange Bed' is set in Paris. Paris is seen as a pleasant and lovely place, a 'delightful City'. However, in the story, the well-educated, high-class narrator visits a dingy gambling den. The narrator wanted to experience a 'wild life' and was 'tired...of all the ghastly respectabilities of such a social anomaly'. This alone, gives the reader of the story an uneasy feeling, as it seems that the narrator is almost searching for danger. As the danger of the unknown is seen as exciting and gives people a thrill- which is what Mr Faulkner wants, and he feels he is going to find this in the gambling den. ...read more.

'...remembered having mechanically drawn back against the posts' the word mechanically in this sentence relates to the mechanical movement when the mattress is lowered in an attempt to murder Mr Faulkner later in the story. The rest of the furniture in the room is described as being cheap, tawdry and dirty. Mr Faulkner notices that the window was an '...unusually large window'; this is the window that he escapes out of later- having remembered that it is large enough for him to fit out of. Mr Faulkner concentrated intently on a 'dark old picture'; the picture was of a 'fellow in a Spanish hat, crowned with a plume of towering feathers'. The man in the picture was looking intently upwards, towards the top of the bed in which the narrator was presently lying in. The picture seemed to have a power over Mr Faulkner and forced him to look upwards towards the top of the bed- showing the reader that there is something strange about the bed. When collecting his thoughts whilst lying sleeplessly in the bed, Mr Faulkner noted that there was something peculiar about the house 'Here was I, in a strange house of the most suspicious character', this shows us that the narrator realises that all is not as it seems in the gambling house. 'The Landlady' is set in Bath. When Billy first entered Bath (for the first time) ...read more.

Although Billy didn't quite realise what the landlady was planning to do, the language used by the author gives the reader the impression that the first atmosphere created in the Bed & Breakfast was false- so as to entice Billy into the house. The nice old lady wasn't so nice after all, but weird and probably dangerous. The stories 'A Terribly Strange Bed' and 'The Landlady' have quite a few similarities. Although the language used in each stories is totally different, the ideas are the same. Both contain a character that at first are pleasant and welcoming, but then we see what they are truly like and realise that all is not how it first seemed. The setting in the stories are different- in 'A Terribly Strange Bed' the setting is the opposite of what Mr Faulkner is used to, it is 'shabby' and 'Dingy'. Whereas, in 'The Landlady' the Bed & Breakfast is seen as being 'nice' and 'welcoming'. The settings help build up the suspense in the stories by creating different atmospheres using the way that the items and people in the rooms are described. I like both stories, but I think that I can relate better to 'The Landlady' as the language used is a lot easier for me to understand. I also prefer the ending in 'The Landlady' as it doesn't actually tell you what happens- it leaves it up to the reader's imagination. ?? ?? ?? ?? Nicola Harley ...read more.