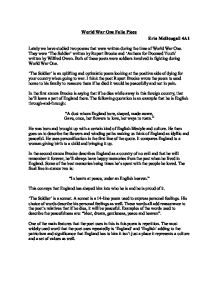 Compare 'The Soldier' written by Rupert Brooke and 'Anthem for Doomed Youth' written by Wilfred Owen.

World War One Folio Piece Erin McDougall 4A1 Lately we have studied two poems that were written during the time of World War One. They were 'The Soldier' written by Rupert Brooke and 'Anthem for Doomed Youth' written by Wilfred Owen. Both of these poets were soldiers involved in fighting during World War One. 'The Soldier' is an uplifting and optimistic poem looking at the positive side of dying for your country when going to war. I think the poet Rupert Brooke wrote the poem to send home to his family to reassure them if he died it would be peacefully and not in pain. In the first stanza Brooke is saying that if he dies while away in this foreign country, that he'll leave a part of England there. The following quotation is an example that he is English through-and-through: "A dust whom England bore, shaped, made aware, Gave, once, her flowers to love, her ways to roam." ...read more.

The structure of the poem is that it has two verses and 14 lines in total. The rhyming scheme is- A B A B C D C D - E F G E F G Each letter represents a line, two lines with the same letter means that it rhymes. Brooke uses alliteration, the consonant that is being repeated is an 'f', it is a soft sound yet again showing calmness and peacefulness: "That there's some corner of a foreign field That is forever England." Other alliteration such as: "Her sights and sounds", "Dream happy as day", And, laughter, learnt of friends". All these show how the poet feels about the possibility of his death. He is optimistic and knows he is prepared to die fighting for his country. The other poem 'Anthem for Doomed Youth' written by Wilfred Owen is also a sonnet. 'Doomed youth' mean all those young men to be sent to war and on the front are destined to die. ...read more.

D is a harsh sound stressing the relatives coping with losing a loved one. This poem is also a sonnet it shows personal feeling of what the poet though about not getting a proper send off. The rhyming scheme is- A B A B C D C D - E F F E G G The poem ends with a rhyming couplet that means the last two lines rhyme. In the first stanza the poet uses onomatopoeia to demonstrate the sound on the battlefield: "Only the stuttering rifles rapid rattle" It is also an example of alliteration. This poem is against war and the inappropriate way these men have lost their lives. The general mood of he poem is anger and sadness. Anger because the young men died unnecessarily without having much of a life and sadness because all these people are dying needlessly and others are mourning because of this. 'The Soldier' and 'Anthem for Doomed Youth' are both sonnets with two stanza and 14 lines but both poem are completely different in their take of the same situation. ...read more.

There are some attempts to analyse the poems here and some use of technical vocabulary is evident. However, there is not enough analysis of the effects of techniques which could have led to some more developed points. It is also best not to analyse poems chronologically as this can lead to a descriptive approach. The difference between poet and narrator needs to be established. A clear question would have helped to create a more focused essay.

This is a response to a question asking about Wilfred Owen and Rupert Brooke's attitude to war. In it, the candidate shows a good sense of focus on the messages the poems conveys, but this is not enough to score ...

This is a response to a question asking about Wilfred Owen and Rupert Brooke's attitude to war. In it, the candidate shows a good sense of focus on the messages the poems conveys, but this is not enough to score higher than a C grade. To exceed this grade, candidate must show an acute understanding of the method the poets use in order to achieve this effect, as well as how they convey the message through poetic and linguistic devices. In order to best do this, candidate should approach the poems after identifying the means by which the poets convey their attitudes (emotive language, irony, patriotism, structure, etc.). Doing this allows candidate to discuss how both poems use these poetic devices in different ways to convey the poets' opinions on war in each paragraph. This is time-effective and also improves the clarity of the points presented as the structure becomes clearer.

The Level of Analysis is average/poor, but there should be more emphasis on the extent to which the poets' opinion on war are conveyed in the poetic structures and language. It's fine enough to comment on the rhyme schemes but what does this tell us about the intentions of the poet? For example, in 'Anthem for Doomed Youth', Owen uses the structure ABABCDCDEFFEGG rather than the conventional sonnet structure which ends in EFEFGG to show his rebellion against the Establishment; rebellion against convention because he did not believe in that which had shaped most of his early life - having rejected religion and his country because of their scandal in saying that dying in war was brave. This contextual understanding and appreciation - or lack thereof - in this candidate's answer limits it's ability to score much higher than a low C grade as this candidate has merely "feature spotted" whereby they identify aspects of poetic structure, language but very rarely provide any insightful analysis and contextual appreciation on it.

The Quality of Written Communication is average. The use of colon in this answer is debatable - it has long been called into question whether one should be used if introducing a quote, but nonetheless, there is no glaring disregard for how one should be used so one can assume this candidate is aware of how to use more complex punctuation points. Their grammar slips occasionally but thankfully never compromises the answer ("There deaths have been brutal and violent") - this is not acceptable at GCSE standard and candidate must not fall foul to a misuse of homophones.