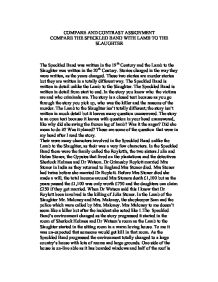 Compare the Speckled Band With Lamb To the Slaughter

COMPARE AND CONTRAST ASSIGNMENT COMPARE THE SPECKLED BAND WITH LAMB TO THE SLAUGHTER The Speckled Band was written in the 19th Century and the Lamb to the Slaughter was written in the 20th Century. Stories charged in the way they were written, as the years changed. These two stories are murder stories but they are written in a totally different way. The Speckled Band is written in detail unlike the Lamb to the Slaughter. The Speckled Band is written in detail from start to end. In the story you know who the victims are and who criminals are. The story is a closed text because as you go through the story you pick up, who was the killer and the reasons of the murder. The Lamb to the Slaughter isn't totally different; the story isn't written in much detail but it leaves many question unanswered. The story is an open text because it leaves with question in your head unanswered, like why did she swing the frozen leg of lamb? Was it the anger? Did she mean to do it? Was it planed? These are some of the question that were in my head after I read the story. ...read more.

The dummy bell pull was put there, so that there would be a hole created in the ventilator. Also the bed was clamp to the floor so that the bed couldn't be moved from under the ventilator. In the Lamb of the Slaughter Mrs Maloney cooked the leg of lamb so that it wasn't trace able. She also went to Sam's shop to get some thing and cover up saying that she was at the shops at the time of the murder. She fed the evidence to the police. To me there was a lot of suspense in the Speckled Band as I got into the story and I found out more clues, which made me keep reading, as there was a lot of description in through out the story. But in the Lamb of the Slaughter there isn't much description through out the story and we weren't told certain events in the story like, what did Mr. Maloney say to Mrs Maloney at the start of the story? Or who solved the case? We found out at the end of the Speckled Band that the snake was the murder weapon and how it was use to kill Julia and try to kill Helen. ...read more.

The story ends in the Speckled Band, the murder case solved by Sherlock Holmes, Dr Roylott dies from the snakebite and the detail of the murder is clearly written as Sherlock explains what how Julia died and the reason why she died. But in the Lamb to the Slaughter the murder case wasn't solved and there were no arrests may by the police as they eat the evidence, while in the next room Mrs Maloney laughs as they eat the evidence. I prefer the story Speckled Band compared to the Lamb to the Slaughter because I find reading descriptive reading very interesting. As you read the story you find out the clues for yourself, like the detective I put all the information together but I don't all ways get the out come that the detective got, I may have a totally different one but I enjoyed reading it. The descriptive write draws the reader into the story like the reader is also investigating the murder case. Sir Arthur Conan Doyle writes in a different style to Roald Dahl, as Roald Dahl uses everyday language it doesn't draw you into the story but if Roald Dahl had written the Lamb to the Slaughter the same style that Sir Arthur Conan Doyle used for the Speckled Band I would have enjoyed reading the Lamb to the Slaughter even more. ...read more.