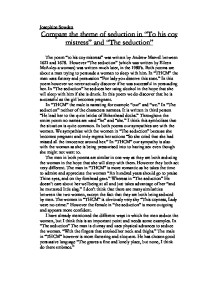 Compare the theme of seduction in &quot;To his coy mistress&quot; and &quot;The seduction&quot;

Josephine Sowden Compare the theme of seduction in "To his coy mistress" and "The seduction" The poem "to his coy mistress" was written by Andrew Marvell between 1621 and 1678. However "The seduction" (which was written by Eileen McAuley-a woman) was written much later, in the 1980's. Both poems are about a man trying to persuade a woman to sleep with him. In "THCM" the man uses flattery and persuasion "For lady you deserve this state." In this poem however we never actually discover if he was successful in persuading her. In "The seduction" he seduces her using alcohol in the hope that she will sleep with him if she is drunk. In this poem we do discover that he is successful as the girl becomes pregnant. In "THCM" the male is narrating for example "our" and "we." ...read more.

Whereas in "The seduction" He doesn't care about her wellbeing at all and just takes advantage of her "and he muttered little slag." I don't think that there are many similarities between the two women, except the fact that they are both being seduced by men. The women in "THCM" is obviously very shy "This coyness, Lady were no crime." However the female in "the seduction" is more outgoing and appears more confident. I have already mentioned the different ways in which the men seduce the women, but I think this is an important point and needs some examples. In "The seduction" The man is clumsy and uses physical advances to seduce the woman. "With the fingers that stroked her neck and thighs." The male in "THCM" however is more flattering and eloquent. He has chosen good persuasive language "The graves a fine and lonely place, but none, I think do there embrace." ...read more.

I think this definitely comes across during the poems, and is a clear difference. In conclusion it is clear that both are poems are about a man seducing a woman in the hope that she will sleep with him. I believe the biggest difference between the poems is to do with the date when they were written. Both time eras had completely different attitudes to sex, which is why the men go about a different way to seduce the women The poem that I find more persuasive and effective is "THCM" because the man actually loved the lady "I would love you ten years before the flood" and his intentions were slightly more pure it seems, compared to the man in "the seduction" who simply took advantage of the woman and didn't care for her one bit. I also think that it is very cleverly written and is interesting how each stanza represents a different time frame. ...read more.