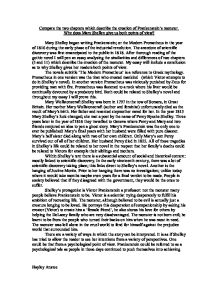 Compare the two chapters which describe the creation of Frankenstein's monster. Why does Mary Shelley give us both points of view? Mary Shelley began writing Frankenstein; or the Modern Prometheus in the year of 1816 during the early phase of the industrial revolution. The anecdote of scientific discovery was first emancipated to the public in 1818. After thorough reading of the gothic novel I will pen an essay analysing the similarities and differences of two chapters (5 and 11) which describe the creation of the monster. My essay will include a conclusion as to why Shelley gives her readers both points of view. The novels subtitle 'The Modern Prometheus' is a reference to Greek mythology. Prometheus in one version was the titan who created mankind (which Victor attempts to do in Shelley's novel). In another version Prometheus was viciously punished by Zeus for providing man with fire. Prometheus was fastened to a rock where his liver would be continually devoured by a predatory bird. Both could be related to Shelley's novel and throughout my essay I will prove this. Mary Wollstonecraft Shelley was born in 1797 in the tow of Somers, in Great Britain. ...read more.

Shelley begins and ends her novel with Captain Walton to frame his text, with an objective voice; which the reader is able to relate to. Shelley tries to portray Walton's actions throughout his narrative as the 'right' within the story. He realises the danger in his ambition and the extreme consequences desire and obsession could result in; using Victor's ambition as an example. Shelley tries to show how people should learn from others mistakes. It is clear to see the changes in the objectives intentions because he has seen the outcome of Victor's ambition; therefore he abandons his own in hope he does not meet a tragic end like Victor. Frankenstein can be referred to as a Gothic novel. Gothic novels have a strong plot of supernatural occurrences often there to evoke terror to the reader. The main protagonist usually has an egocentrical nature. Within Frankenstein isolation of the two main characters is portrayed by nature. The glacial Alps and the frosty arctic do this. Shelley uses recent discoveries of her time to create her novel. She uses the new discovery of electricity (which its concepts lead to the galvanisation process which was said to be the key to instigating life) ...read more.

It is as if the oil and water portray good and evil although no-body knows which the evil was: was it Victor's ambition or the prejudice which forced the monster into his actions. Mary Shelley enables the readers the chance to hear both points of view in order for them to have a clear understanding of the story. Without both sides the novel would obviously be biased with an inevitable outcome, no tension, and absolutely no emotional relations for the reader to empathise with. The novel entices the reader because of its argument enabling the reader to conjure their own conclusion whilst learning new facts which may change what they think. It is a good way to involve the readers' imagination. In conclusion to my essay I have found that Shelley's choice of structure, plot and narrative are very good choices and are extremely effective when it comes to the reader empathising with individual characters. Within Shelley's novel she uses effective vocabulary to entice the reader and provide them with messages relevant to life as a whole. One extremely effective message is that from Victor. 'Learn from my miseries and do not seek to increase your own' it is as if Shelley wishes for the reader to relate to him. Shelley wants her readers to do exactly what she penned about Victor. 'Obsession gets you nowhere its desire for love that's strongest' Hayley Anstee ...read more.

An interesting and well written essay and the writer is obviously a very capable student who knows the novel well.
The very good points of this essay are the perceptive and sophisticated comments especially relating to the craft of the author. There are some interesting and original ideas expressed here.
Sometimes these interesting ideas are under explored or make the essay lose focus on the actual essay question. The structure of the essay needs more work.
Information from sources needs to be paraphrased.