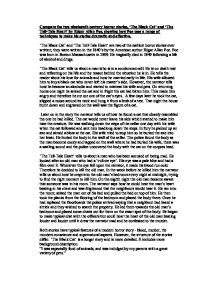 Compare the two nineteenth century horror stories, 'The Black Cat' and 'The Tell-Tale Heart' by Edgar Allan Poe, showing how Poe uses a range of techniques to make his stories dramatic and effective.

Compare the two nineteenth century horror stories, 'The Black Cat' and 'The Tell-Tale Heart' by Edgar Allan Poe, showing how Poe uses a range of techniques to make his stories dramatic and effective. 'The Black Cat' and 'The Tell-Tale Heart' are two of the earliest horror stories ever written; they were written in the 1840's by the American author Edgar Allan Poe. Poe was born in Boston Massachusetts in 1809. He tragically died in 1849 following a life of alcohol and drugs. 'The Black Cat' tells us about a man who is in a condemned cell. He is on death row and reflecting on his life and the reason behind the situation he is in. He tells the reader about his love for animals and how he married early in life. His wife allowed him to buy a black cat who never left his master's side. However, the narrator tells how he became an alcoholic and started to mistreat his wife and pets. On returning home one night he seized the cat and in fright the cat had bitten him. This made him angry and therefore he cut out one of the cat's eyes. A few days later he took the cat, slipped a noose around its neck and hung it from a limb of a tree. That night the house burnt down and engraved on the wall was the figure of a cat. ...read more.

The two narrators have various things in common; they both tell the story in first person and use eyes as an important feature in the story. In the opening paragraph both narrators also say that they have been accused of madness but deny the accusation. "Mad indeed would I be to expect it, In a case where my very senses reject their own evidence. Yet, mad am I not." This quote from 'The Black Cat' supports my point that the narrator has been accused of being mad but denies it. "But why WILL you say that I am mad?" This quote from 'The Tell-Tale Heart' also supports my point as it is from the opening paragraph of the story and the narrator is asking why he is being accused of being mad. The significant differences between the two narrators are; 'The Black Cat' gives a more in-depth background about his life before the present day whereas 'The Tell-Tale Heart' goes straight into the present. 'The Black Cat' is also set in different rooms of the house and other areas where as 'The Tell-Tale Heart' is set in just one room. The relationship between the readier is also different. 'The Black Cat' is wrote as if the narrator is writing a letter whereas 'The Tell-Tale Heart' is wrote as if the narrator is actually speaking to the reader. ...read more.

Edgar Allan Poe uses a large amount of rhetorical questions. "How then am I mad?" This is effective in the story as it involves the reader. It does so by encouraging the reader to reflect upon the question and therefore get involved more with the story. Poe also uses repetition. "He had found all in vain. All in vain; because Death, in approaching him...." The repetitive phrase all in vain, tells us of the narrators joy at the old mans terror. He also uses a capital 'D' in death. This infers he is using death as a name, suggesting that the old man is death. In 'The Black Cat' Poe uses plenty of rhythm and repetition. "Have terrified -- Have tortured -- Have destroyed me." In this quote Edgar Allan Poe has repeated the word 'have'. He has used a rhythm by pausing at the end of each word and the dashes indicate an intensity of emotions. He has also used evil words such a 'terrified' and 'tortured' which again emphasise the fear and terror of the story. This makes the story more dramatic. In both stories Poe also uses capital letters to emphasise words this gives an immediate dramatic impact. In conclusion, Poe uses a range of techniques to make his stories dramatic and effective, many of these are still used by horror writers today. Although 'The Black Cat' and 'The Tell-Tale Heart' are similar in numerous ways, Poe uses different techniques in each one to make the stories effective in their own particular way. ?? ?? ?? ?? ...read more.