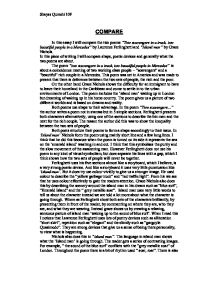 Compare the two poems Two scavengers in a truck, two beautiful people in a Mercedes by Laurence Ferlinghetti and Island man by Grace Nichols.

COMPARE In this essay I will compare the two poems "Two scavengers in a truck, two beautiful people in a Mercedes" by Laurence Ferlinghetti and "Island man" by Grace Nichols. In this piece of writing I will compare shape, poetic devices and generally what the two poems are about. The poem "two scavengers in a truck, two beautiful people in Mercedes" is about a coincidence meeting of two working class people - "scavengers" and a "beautiful" rich couple in a Mercedes. This poem was set in America and was made to present that there is deference between the two sets of people, the rich and the poor. On the other hand Grace Nichols shows the difficulty for an immigrant to have to leave their homeland in the Caribbean and come to settle in to the urban environments of London. The poem includes the 'island man' waking up in London but dreaming of waking up in his home country. ...read more.

However Ferlinghetti does not use his poem in any kind of visual symbolism, but does separate his lines with a gap, which I think shows how the two sets of people will never be together. Ferlinghetti uses his five sections almost like a storyboard, which I believe, is a very strong poetic device. And like a storyboard it uses very little punctuation like 'island man'. But it does try use colour vividly to give us a stronger image. He used colour to describe the "yellow garbage truck" and "red traffic light". From his we see that he uses colour effectively to gain the readers attention. Grace Nichols also does this by describing the scenery around the island man in his dream such as "blue surf", "Emerald Island" and the " grey metallic soar". Island man uses very little words to tell us about the character instead we are told a lot more about what the character is going through. ...read more.

sound of blue surf" "groggily, groggily, muffling, muffing" repetition and alliteration. When I read both of these poems I find that they both have the same overall meaning that, two things can be so different in people eyes, such as in two scavengers I am told about the completely different lives between the bin men and the two rich people. In island man I am told that a man can easily miss home his home nation and how different the cultural places are. On the whole I enjoyed the poems very much. I believe that island man is very small but has a bigger meaning and more impact by the way the author doesn't say much but whole a sense of rhythm. On the other hand two scavengers uses the fact that the classes are so diverse and I think that the author commented on the way the people looked at each other and the way the two people are far apart, not only in the poem but in their titles as well. Shayss Qureshi 10F ...read more.