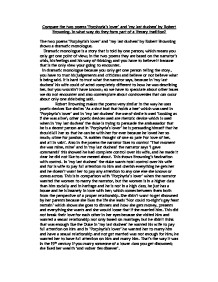 Compare the two poems 'Porphyria's lover' and 'my last duchess' by Robert Browning. In what way do they form part of a literary tradition?

Compare the two poems 'Porphyria's lover' and 'my last duchess' by Robert Browning. In what way do they form part of a literary tradition? The two poems 'Porphyria's lover' and 'my last duchess' by Robert Browning shows a dramatic monologue. Dramatic monologue is a story that is told by one person; which means you only get one point of view; in the two poems they are based on the narrator's crisis, his feelings and his way of thinking; and you have to believe it because that is the only view your going to encounter. In dramatic monologue because you only get one person telling the story, you have to trust his judgements and criticisms and believe or not believe what is being said. It is hard to trust what the narrator says, because in 'my last duchess' his wife could of acted completely different to how he was describing her, but you wouldn't have known; so we have to speculate about other issues we do not encounter and also contemplate about controversies that can occur about only one side being said. Robert Browning makes the poems very similar in the way he uses poetic devices like similes 'As a shut bud that holds a bee' which was used in 'Porphyria's lover' and in 'my last duchess' the use of simile is used 'Looking as if she was alive'; ...read more.

He had no control over her like he had no control either so they both resulted to death; which they both then have total control. Both the poems the narrator is driven to murder because they are possessive; they like things to go their way otherwise they get angry, and the duke saw his wife as a adornment to show he has a nice wife and she is superior compared to him, where as Porphyria was driven to murder because she would not marry him and then if he killed her, he will have her for ever. The comparisons are what differs the two poems from each other; when Porphyria came through the door she shut the atmosphere with her to bring warmth and happiness 'she shut the cold out and the storm' Robert Browning uses personification to show the storm that is going on out side and the storm that is going on in his head. This leads him want more from her and to be with her. In 'Porphyria's lover' he is virtually mentally unstable and soon to find out that he is psychotic. He expresses his psychotic-ness when he decides cold heartedly to kill his lover and partner. Due to him contemplating and pondering in his mind how he could be with her 'And called me. ...read more.

The story in his mind was what he thinks. He was insanely possessive. He was an extremely jealous person 'as if she ranked my nine-hundred-years-old name with anybody's gift'. His partner was flushed with desire, she like to be nice and kind to people so we are told and she is to easily flattered 'to easily impressed'. This is also a different story line to the other poem because the duke wants to get married to the count of Tyrol so he has taken the ambassador to look at his possessions, which means the most to him, and talk to him about his last wife and how he does not want to be messed around. Whilst the ambassador was there his job is to talk to the Count of Tyrol about everything so the duke is trying to be in his good side and speak politely and also uses false modesty when he says 'even had you skill in speech - (which I have not)' when in fact he has probably got a better speech than him. This is also a case in Shakespeare - Julius Caesar when Brutus his best friends made a powerful speech that drew the people to vote for him and used a rhetorical device which is used to persuade people. This is irony and it is used for effect. I conclude by saying that the themes Browning used where success, failure, power and disappointment. ...read more.