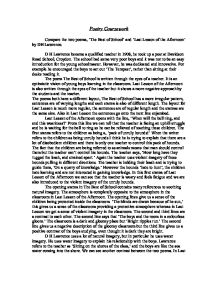 Compare the two poems, 'The Best of School' and 'Last Lesson of the Afternoon' by DH Lawrence.

Poetry Coursework Compare the two poems, 'The Best of School' and 'Last Lesson of the Afternoon' by DH Lawrence. D H Lawrence became a qualified teacher in 1908, he took up a post at Davidson Road School, Croydon. The school had some very poor boys and it was not to be an easy introduction for the young schoolmaster. However, he was dedicated and innovative. For example he encouraged the boys to act out 'The Tempest', rather than sitting at their desks reading it. The poem The Best of School is written through the eyes of a teacher. It is an optimistic vision of young boys learning in the classroom. Last Lesson of the Afternoon is also written through the eyes of the teacher but it shows a more negative approach by the students and the teacher. The poems both have a different layout, The Best of School has a more irregular pattern, sentences are of varying lengths and each stanza is also of different length. The layout for Last Lesson is much more regular, the sentences are of regular length and the stanzas are the same size. Also in Last Lesson the sentences go onto the next line enjambed. Last Lesson of the Afternoon opens with the line, 'When will the bell ring, and end this weariness?' From this line we can tell that the teacher is facing an uphill struggle and he is waiting for the bell to ring so he can be relieved of teaching these children. ...read more.

Lawrence refers to the teacher as 'Sitting on the shores of the class,' and the boys are like the sea water coming into the shore. We can see another contrast between the two poems. In Last Lesson the boys are 'Tugging on the leash,' and want to go in a different direction to the teacher but in The Best of School the boys are willing to follow the teacher. The first stanza of the Best of School indicates that the boys are focused on the task that the teacher has set them. 'As they write, their heads busily bowed.' The words 'Busily bowed' show us that the boys are actively thinking and I think that the word 'Bowed' refers to their acknowledgement of the teachers input and a sense of respect that the boys share for the teacher. As Last Lesson of the Afternoon progresses towards the third and fourth stanzas the teacher takes a more frustrated and angry tone. The boys in the class were from working class backgrounds. This meant that they were destined for jobs in the factories and other working class industries. The imagery contains words associated with factories and industrial production, words such as 'fuel', 'kindle', 'flame', and 'dross'. The teacher seems to lose hope in the boys, 'I will not waste my soul and my strength for this.' ...read more.

The final stanza of The Best of School is much more positive than Last lesson. The teacher uses words such as 'cling' and 'cleave', these 'C' words suggest the closeness between the teacher and the boys. 'As vines going eagerly up; they twine.' The imagery of the vines interlocking shows that they have gained knowledge and grown. When the vines twine they become stronger but separately they are easily broken. I think that the last two lines sum up the poems well because it expresses the symbiotic relationship whereby the boys and teacher gained knowledge and developed a relationship with each other. 'My life with other leaves, my time is hidden in theirs, their thrills are mine.' I think we can use Lawrence's reference to the vines to explain how the boys developed a relationship with the teacher. In Last Lesson of the Afternoon the teacher gives up and the boys are not inspired by him, they are like separate vines. Where as in The Best of School the boys are inspired by the teacher and the teacher is 'generous' in sharing his knowledge, their vines have grown stronger and are stronger because they twine with each other. The boys who are referred to as vines need a support to grow on, the teacher is their support and helps them to grow. In the Best of School it is not only the boys who enjoy the learning experience but the teacher also finds joy in teaching the boys and watching them learn, 'their thrills are mine.' ...read more.

There is much useful analysis here, but the essay writer neither declares his/her intentions in writing this essay, nor any overall conclusions. As such we are given no criteria to judge how effectively the writer has discharged his/her task.

There is a little plagiarism in the first paragraph.

Sentence and paragraph construction are well controlled and the lexis is mostly up to the task.