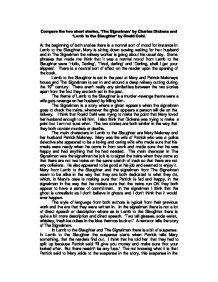 He also appeared to be good at his job and seemed to enjoy it. Mary from Lamb to the Slaughter and the signalman from The Signalman seem to be alike in the way that they are both dedicated to what they do, which, in Mary's case is making sure that Patrick is fed and happy, in the signalman in the way that he makes sure that the trains run OK they both appear to have a sense of commitment. In the signalman I think that the ghost is unrealistic as I don't believe in ghosts and I don't think that it would ever happen. The style of language from both authors is typical from their previous work and the era that they were written in. In the signalman there is not a lot of direct speech or description where as in Lamb to the Slaughter there is quite a bit more description and direct speech. 'Two tall glasses, soda water, whiskey, fresh ice cubes in the blue thermos bucket.' ...read more.