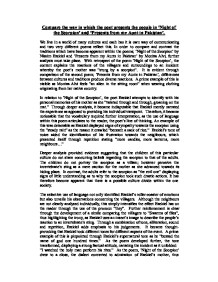 Compare the way in which the poet presents the people in 'Night of the Scorpion' and 'Presents from my Aunt in Pakistan'. We live in a world of many cultures and each has it is own way of communicating and two very different poems reflect this. In order to compare and contrast the traditions which have become apparent within the poems; 'Night of the Scorpion' by Nissim Ezekiel and 'Presents from my Aunts in Pakistan' by Moniza Alvi, further analysis must take place. With retrospect of the poem 'Night of the Scorpion', the content explains the reactions of the villagers and surroundings to an incident whereby the poet's mother was "stung by a scorpion". It is evident through comparison of the second poem; 'Presents from my Aunts in Pakistan', differences between cultures and traditions produce diverse reactions. A prime example of this is visible as Moniza Alvi feels "an alien in the sitting room" when wearing clothing originating from her native country. In relation to 'Night of the Scorpion', the poet Ezekiel attempts to identify with his personal memories of his mother as she "twisted through and through, groaning on the mat." Through deeper analysis, it became indisputable that Ezekiel merely narrated the experience as apposed to providing his individual viewpoint. Therefore, it became noticeable that the vocabulary required further interpretation, as the use of language within this poem articulates to the reader, the poet's line of thinking. An example of this was detectable as Ezekiel displayed signs of sympathy towards the scorpion using the "steady rain" as the reason it crawled "beneath a sack of rice." ...read more.

However, the poet resents his father, as he seems to make the situation worse, and "even poured a little paraffin upon the bitten toe and put a match to it." The poet uses alliteration to describe the reactions of what his mother is going through and only describes his father with just one-word answers such as "rationalist". This highlighted a further difference between that of Ezekiel's mother and father. There is only one real similarity between the mother and father and that appears to be one of emotional turmoil experienced throughout the ordeal. The father is going through pain at the sight of watching his wife reaction to the sting, while the wife is going through the same because of the actual sting. Moniza Alvi is presented as a confused, fashionable teenage girl, who is of ethnic origin. "My salwar kameez didn't impress the school friend." The poem has a deeper meaning that merely receiving unwanted gifts, Moniza Alvi is attempting to express her difficulties combining her native origin and her current country of residence. Moniza Alvi uses descriptive language to help the reader envisage the complications encountered when growing up "half English "in a different country to that of Pakistan. Moniza Alvi expresses her concerns regarding the impossibility of contrasting two different cultures and feels a torn feeling "an alien" wearing her aunts "apple-green sari". Moniza Alvi desperately battles with her conscious trying not to appear ungrateful and as a direct result feels, she does not belong entirely to one of the two cultures. ...read more.

One main similarity about the poems is both of the people are retelling a story. This is suggested by the way both poems use "I" allot. Night of the scorpion is retelling the story about when his mother was stung by a scorpion. In Presents from my Aunts in Pakistan, Moniza Ali is retelling the story of how she had come to England. This is also shown how the poems remember odd details like the "tin boat" in Present from my aunts in Pakistan I watched the flame feeding on my mother". In conclusion both poems had there own unique way of getting across there points, they both made the reader think extremely hard on matters such as different cultures and traditions. Night of the Scorpion was easier to understand even though the title was misleading, nevertheless Presents from my Aunts in Pakistan showed how hard it was to have been growing up in England and not knowing which culture, you fitted into. I have learned from Presents from my Aunts in Pakistan that it is important to know where come from, which I think Moniza Alvi was lacking as a child. From Night of the Scorpion I've learned that having faith can help you get through the most serious of problems even if there life threatening. Over all I think my favourite poem out of the two must be Night of the Scorpion, as I think it has an excellent morel and gets it across really well. I also like Night of the Scorpion because it make's you think about the poem long after you have read it! ...read more.