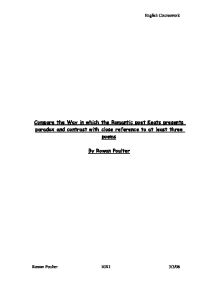 Compare the Way in which the Romantic poet Keats presents paradox and contrast with close reference to at least three poems By Rowan Poulter Keats had a very short life. He died when he was twenty six after being diagnosed with tuberculosis, the same disease that killed his brother. His illness made him reflect on his life in morbid but sometimes positive points of view. His experience with women and of being rejected also influenced his poetry. Keats was a romantic poet; a type of poetry in which imagination, passion, thoughts and the merging of the sense is key to enhance the rigid formal structure of poetry. The words romantic does not signify that he is romantic, but that he uses imagination and passion to express his views and thoughts about life, and about the world itself within his poetry. Keats uses his life experiences to form themes within his poems, some of these include: life and death, dream and reality, separation and connection and morality and immorality. Literary author and Keats expert Douglas Bush noted that "Keats's important poems are related to, or grow directly out of...inner conflicts." For example, pain and pleasure are intertwined in "Ode to a Nightingale" and "Ode on a Grecian Urn"; love is intertwined with pain, and pleasure is intertwined with death in "La Belle Dame Sans Merci," "The Eve of St. Agnes." 1 These conflicts are in close relation to his life; the death of his brother, his illness and his experience of rejection by women, and they are the conflicts that appear most in his poems, especially his odes as they were mostly written after the diagnosis, and therefore he was aware of the fact that he had little time to live. ...read more.

This links to 'Romeo and Juliet' "happy dagger" and to 'Ode on a Grecian Urn' where 'happy' is repeated in a negative context. This is used as a contrast to show that even in a perfect, wonderful world people still are not always happy, and that sometimes the happiness is faked, or that there are hidden feelings of despair underneath. This links with 'To Autumn' as this poem is often seen as fake by some people. The letters used in 'Ode to a Nightingale' add to the atmosphere of the poem. In the line "fade far away" the letter 'f' is used is used to soften the line, and makes a contrast between the sound and the meaning of the word. The words 'fade far away' are also incongruous; they sound as if they are fading into nothing. The last line of the fifth stanza, "The murmurous haunt of flies on summer eves" is very relevant to the poem. 'Summer eves' are meant to be a beautiful time of year, but the 'flies' ruin the atmosphere and are used to show that everything that is beautiful has a dark side. This could be linked to Fanny Brawne, and how even though he loved her, she still wouldn't marry him; almost as if this ruined his perfect image of her. It also links in with the themes of the poem (escapism), and the poem 'To Autumn' and the representation of autumn within it. The word 'murmurous' is onomatopoeia, as the sound of the word is almost represents the meaning. The words "forlorn" and "Adieu!" are repeated towards the end of the poem a lot. ...read more.

There are negative religious connotations, "mysterious priest", which links to Paganism and Christianity; contrasting between worshipping 'God' and worshipping 'deities'. The last two lines of the ode, ""Beauty is truth, truth beauty,--that is all/ Ye know on earth, and all ye need to know."" links to Keats' letter to Benjamin Bailey, 22nd November 1817, "I am certain of nothing but the holiness of the Heart's affections and the truth of Imagination - what the imagination seizes as Beauty must be truth - whether it existed before or not". This is answering the questions and concluding the poem. He is lulling himself into a false sense of truth; saying that in his mind everything is beautiful, and that only when you understand things do you really see their true beauty. Overall I think Keats' poetry links into his life in many ways. His portrayal of contrast and paradox ranges through all his themes: mortality and immortality, love and hate, life and death, joy and despair, etc. He uses the senses to contrast between the living and the imaginary worlds of which he writes. I think that 'Ode on a Grecian Urn' was the most successful poem because it is easy to see how he links to poem to his life experiences, whether good or bad, and how he uses his feelings to contrast between the real world and the world on the Grecian Urn. 'Ode to a Nightingale' is the most personal of odes, and 'To Autumn' shows contrast and paradox very well, however, I personally preferred reading and writing about 'Ode on a Grecian' as I found it the most interesting of the three poems. All of the poems contrasted between his real life, his illness and his rejection by women, and the odes to create a massive contrast and paradox, which helps bring the poems to life. ...read more.