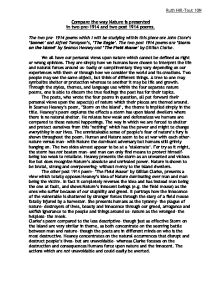 Compare the way Nature is presented in two pre-1914 and two post 1914 poems. The two pre- 1914 poems which I will be studying within this piece are John Clare's 'Sonnet' and Alfred Tennyson's, 'The Eagle'. The two post 1914 poems are 'Storm on the Island' by Seamus Heaney and 'The Field Mouse' by Gillian Clarke. We all have our personal views upon nature which cannot be defined as right or wrong opinions. They are simply how we humans have chosen to interpret the life and natural forces around us- badly or complimentary they vary depending on our experiences with them or through how we consider the world and its creations. Two people may see the same object, but think of different things. A tree to one may symbolize shelter or protection whereas to another it may be life and growth. Through the styles, themes, and language use within the four separate nature poems, one is able to discern the true feelings the poet has for their topics. The poets, who wrote the four poems in question, all put forward their personal views upon the aspect(s) of nature which their pieces are themed around. In Seamus Heaney's poem, 'Storm on the Island', the theme is implied simply in the title. Heaney's poem explores the effects a storm has upon island dwellers where there is no natural shelter. He relates how weak and defenseless we humans are compared to these natural happenings. ...read more.

In the Eagle this is particularly attention grabbing with the use of alliteration to strengthen the beat: 'He clasps the crag with crooked hands.' Tennyson also uses rhyming triplets to add emphasis- using the power of three to make his short poem more memorable and again emphasized. Though Heaney does not have rhyming triplets, the iambic pentameter is used to create the emphasis on every other word- re-enforcing the military kind of warfare commencing within his poem of man and nature. The structure of John Clare's Sonnet is as its name implies- a fourteen line verse each with ten syllables and rhyming couplets which emphasize the childlike perception of nature- as young children are fixated in writing poems which rhyme I know I did not believe a piece of writing was a poem unless it was rhyming. I remember thinking that the definition of a poem was a versed rhyming- cat sat on mat type piece. It adds to the youthful innocence and charms the reader. It does not particularly have any similarities with The Eagle and Storm on the Island and though does have 10 syllables on every line, the way in which the poem is devised and written makes it impossible to really emphasize this beat- if beat you can call it. Its is a un serious, un meaning poem of the love Clare has for nature which sets it aside from the other three- more so thought provoking and complex verses. ...read more.

This is almost definitely due to the huge world wars of 1914 onwards which took place and the after shocks which followed. Though this is only a guess, it would explain the rather sudden change on the outlook of our lives and nature. Millions of people had died suffered and had had their homes destroyed- creating misery, devastation and thousands of refugees. Storm on the Island even has some likeness to the Blitz. Having to build improved safer shelters to protect themselves from the bombardment and rage of the storm reminds us rather of people having to build air raid shelters and take refuge in the underground to protect themselves from the deadly bombings in world war two. The innocence of the way humans had viewed the world and nature pre 1914 seems to have gone and instead we see the wrong in the world not just the right and the goodness of it as portrayed in the Sonnet and Eagle. Nature is first presented as great- amazing, beautiful- awe inspiring but then a catastrophe occurs and our sight is tinted to see nature as the tyranny, the barbarian- but then also the oppressed and the meek. Put them all together and nature suddenly from just 4 points of view collaborated, is everything- great- but vulnerable, demonic but beautiful, the monster but also the peace bringer. Nature is presented as everything- from the regal eagle to the smallest mouse to the storm- to the sun. We cannot live with nature, but we cannot live without it either. ...read more.