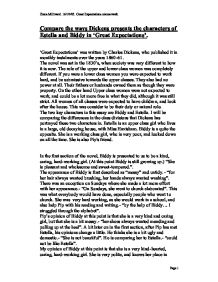 Compare the ways Dickens presents the characters of Estella and Biddy in 'Great Expectations'.

Compare the ways Dickens presents the characters of Estella and Biddy in 'Great Expectations'. 'Great Expectations' was written by Charles Dickens, who published it in monthly instalments over the years 1860-61. The novel was set in the 1830's, when society was very different to how it is now. The role of the upper and lower class women was completely different. If you were a lower class women you were expected to work hard, and be submissive towards the upper classes. They also had no power at all. Their fathers or husbands owned them as though they were property. On the other hand Upper class women were not expected to work, and could be a lot more free in what they did, although it was still strict. All women of all classes were expected to have children, and look after the house. This was consider to be their duty or natural role. The two key characters in this essay are Biddy and Estella. I will be comparing the differences in the class divisions that Dickens has portrayed these two characters in. Estella is an upper class girl who lives in a large, old decaying house, with Miss Havisham. Biddy is a quite the opposite. She is a working class girl, who is very poor, and looked down on all the time. She is also Pip's friend. In the first section of the novel, Biddy is presented to us to be a kind, caring, hard-working girl. ...read more.

In this section because Biddy has grown-up, her jobs and domestic tasks has changed slightly especially at the beginning of this where Biddy is helping to look after Mrs Joe.- "Biddy... sat holding my sister's plate" Later on at the funeral Biddy was thinking of getting a job at the new local school.- "I am going to try to get the place of mistress in the new school". Pip's opinion of Biddy at this point is more or less the same from the first section. He still thinks she is not beautiful.- "She is common". Pip feels a bit sorry for Biddy.- "I did not like the thought of making her cry again". This shows that Pip felt sorry for her and did not want to upset her and make her cry again. This is very important because Pip had already made her cry a bit earlier on, and that he did not want to do it again. Even though Pip does not think Biddy is anything like Estella and is a bit mean to Biddy, he still loves and cares about Biddy enough to not want to make her cry. My opinion of Biddy at this point in the novel are the same, apart from I think she has grown up and matured. She is still timid and shy, and knows where her place is. When we meet Estella in the middle of the novel, she has changed a bit of course because she is older now and more grown up.- "She was so much changed". ...read more.

In the final section of the novel when we meet Estella for the last time, she is a lot older - like Biddy except unlike Biddy, Estella is more unhappy in life.- "the saddened... eyes". Pip has noticed this in her eyes, which were once so bright. Her appearance has changed greatly, unlike Biddy from when we first met her. Estella has become older.- The freshness of her beauty were indeed gone". She is not as beautiful as before, but other ways about her remained.- "its indescribable charms remained". Another thing that has changed slightly in her - her personality. Whereas before she was cold and harsh towards things, particularly men, she is now a lot more soft and kind.- "I have often thought of you.". She is saying this to Pip. Estella's job and domestic tasks at this stage in the novel have changed from when we first met her. Back then her main aim in life was to get back at men, and to be as mean and horrible to them as she wanted. Now that she has grown up, and had lots of bad experiences in life, she now does not really have a job or purpose in life. She has changed greatly. Pip's opinion of Estella at this point is that she has changed greatly. She has become more relaxed, and has calmed down, and come to her senses. Unlike Biddy who has more or less stayed the same throughout the book. Estella's personality has changed, she is a lot less proud and powerful. Unlike Biddy, Estella has changed a lot. ?? ?? ?? ?? Elena Millward. 16/10/05. Great Expectations coursework. Page 1 ...read more.