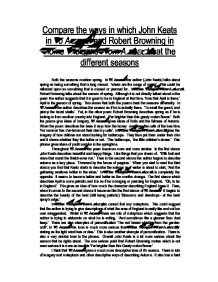 Compare the ways in which John Keats in To Autumn and Robert Browning in Home Thoughts From Abroad treat the different seasons Both the seasons mention spring. In To Autumn the author (John Keats) talks about spring as being something that is long missed. 'where are the songs of spring'. This could be reflected upon as something that is missed or yearned for. In Home Thoughts From Abroad Robert Browning talks about the season of spring. Although it is not directly talked about in the poem the author suggests that it is good to be in England at that time. 'Now that April is there.' April is the season of spring. This shows that both the poems treat the seasons differently. In To Autumn the author describes the season as if he is actually there. ...read more.

Like things that you dream of. 'With fruit and vines that round the thatch-eves run.' Then in the second stanza the author begins to describe autumn as a lazy place. 'Drowsed by the fumes of poppies.' When you start to read the third stanza you find that Keats starts to describe the autumn as if winter is about to start, 'And the gathering swallows twitter in the skies.' In Home Thoughts From Abroad it is completely the opposite. It seems to become better and better as the months change. The first stanza which describes April is more patriotic and it is as if he is longing or yearning for England. 'Oh, to be in England.' This gives an idea of how much the character describing England loves it. Then, when it comes to the second stanza it becomes like the first stanza of To Autumn. ...read more.

The one serious point that Robert Browning makes which is not even serious it is more an insult is 'Far brighter than this Gaudy melon flower.' I think that To Autumn gives a much more descriptive idea of it's season. There is lots of imagery and metaphors and other descriptive ways of describing Autumn. It also has a faint rhyme pattern which works very well in conjunction with the poem. I think that To Autumn is a much more interesting and vibrant poem than Home Thoughts From Abroad. In Home Thoughts From Abroad the reader knows where he is and there is no surprise or time to imagine where you are, 'Oh, to be in England.' We also live in England so we know that it is not always like this. Whilst in To Autumn You have no idea where you could be and the poem seems to work your imagination a lot more than Home Thoughts From Abroad. ...read more.