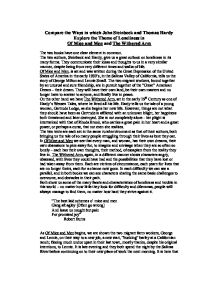 Compare the Ways in which John Steinbeck and Thomas Hardy Explore the Theme of Loneliness in Of Mice and Men and The Withered Arm The two books have one clear element in common. The two authors, Steinbeck and Hardy, give us a great outlook on loneliness in its many forms. They communicate their ideas and thoughts to us in a very similar manner, despite being from very different times and walks of life. Of Mice and Men, is set and was written during the Great Depression of the United States of America in the early 1930's, in the Salinas Valley of California, tells us the story of George Milton and Lennie Small. The two migrant workers, bound together by an unusual and sure friendship, are in pursuit together of the "Great" American Dream - their dream. They will have their own land, be their own masters and no longer have to answer to anyone, and finally live in peace. On the other hand we have The Withered Arm, set in the early 19th Century as one of Hardy's Wessex Tales, where he lived all his life. Hardy tells us the tale of a young woman, Gertrude Lodge, as she begins her new life. However, things are not what they should have been as Gertrude is afflicted with an unknown blight, her happiness both threatened and later destroyed. She is not completely alone - her plight is intertwined with that of Rhoda Brook, who carries a great pain in her heart and a great power, or perhaps a curse, that not even she realises. The two texts are each set in the same rural environment as that of their authors, both bringing us the tale of so many people struggling through their lives as best they can. In Of Mice and Men we see that every man, and woman, has their own dreams, their own obsessions to pine away for, to imagine and envisage when they are so often so lonely - each has their own thoughts, their method, of escapism from the reality they live in. ...read more.

are being dishevelled, the one thing she believes herself to truly hold is mishandled, and so she pulls away, expressing her distress. Lennie panics and does the only thing that his simple mind can think of - resist, and so he grips hold of her tighter, unwilling to let go, he is confused and frightened and understands nought of what is happening. He fears that if George were to find out that he had made someone unhappy and done wrong by them he would abandon and discard him, fearing disapproval if his actions were ever discovered; and so he clamps his hand over her mouth, hoping that none would hear the noise. He grips even tighter as she struggles all the more desperately in the pain that his awesome strength is causing her, and he jerks and shakes her body in response, in an attempt to silence her. In this he succeeds, but to an extent that he never intended - he unwittingly breaks her neck. Yet again Lennie has caused great harm without ever realising it possible, and this time the outcome is greatly worse. She was always alone, always without somebody, even those closest to her appear to have wished against her happiness; John Steinbeck signifies this to us by never naming Curley's wife - she was never important to the person, and the people, that she should have been. As soon as she finds someone that was conceivably different, perhaps wasn't like all the others, she takes it all too far too soon, without thinking of the consequences. As a result she loses everything. The story ends in the pursuit of Lennie, George goes after him with the other men for he cannot let them get to him first and it is here that we are reminded of Candy's words upon his own companion, his pet dog, "I ought to of shot that dog myself, George. ...read more.

His fear of disapproval forces him to take a life without ever intending to. It is upon George's shoulders to end the story, for there is only one possibility - he must end all his hopes, condemn himself to being alone with his guilt, every chance that they had together and those around them found upon their arrival for he must take Lennie's life to save him from misery. This pressure from American society and the unbending rules on what people should and shouldn't be causes so much dissatisfaction and unrest, leaving everyone feeling hopeless and alone, that they have been brought up to believe. They thought they had a chance, and they found nothing. The Withered Arm, on the other hand, is set in a world of tradition, of British society and its harsh social structure. In everyone's mind there is desperation to conform to the rules and agree that unless you are upper class, or in the case of the women - married, you are no one. Rhoda isolates herself from all others in her desperation to become someone, Farmer Lodge's wife, and be counted and in doing so sentences herself to a life of loneliness, and starts much more for many others. For Gertrude there is a desperation to be what the materialistic views of those around her tell her to be, and in her search for this she ends up isolating her self even more than before. The young son, who nobody ever really looks to care for, there is isolation of a different kind and through no fault of his own. His parents never truly acknowledge him as their son and this ultimately ends in his tragic death. For Farmer Lodge, it is his materialistic conformism that causes many problems, and he isolates himself from all others in this story until the end, where it is he and Rhoda left and doomed to each be utterly alone for their sins. ...read more.