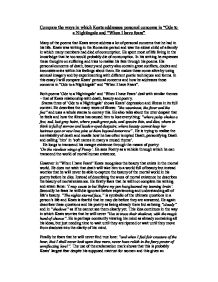 Compare the ways in which Keats addresses personal concerns in &quot;Ode to a Nightingale and &quot;When I have fears&quot;.

Compare the ways in which Keats addresses personal concerns in "Ode to a Nightingale and "When I have fears" Many of the poems that Keats wrote address a lot of personal concerns that he had in his life. Keats was writing in the Romantic period and was the eldest child of a family in which many members had died of consumption. He spent most of life living in the knowledge that he too would probably die of consumption. In his writing he expresses these thoughts on suffering and tries to realise his fate through his poems. His personal concerns of death, beauty and poetry also contain great conflicts, doubts and inconsistencies within his feelings about them. He makes these come alive by using sensual imagery and by experimenting with different poetic techniques and forms. In this essay I will compare Keats' personal concerns and how he addresses these concerns in "Ode to a Nightingale" and "When I have Fears". Both poems 'Ode to a Nightingale' and 'When I have Fears' deal with similar themes - that of Keats relationship with death, beauty and poetry. Stanza three of 'Ode to a Nightingale' shows Keats' depression and illness in its full context. He describes the many woes of illness: "the weariness, the fever and the fret" and uses a whole stanza to convey this. He also talks about the utter despair that he feels and how the illness has caused him to lose everything: "where palsy shakes a few, ...read more.

Water and land come together, the boundaries constantly in flux, changing and ebbing in and out depending on seasons, on times and on change. This is perhaps a metaphor for Keats' own personal feelings and the point in which he crosses from one state of thought into another. He describes himself to be standing on the shore teetering between one state and the other. The state described at the end of the poem shows a change in his thoughts: 'and think / Till Love and Fame to nothingness do sink.' He realises that perhaps his own dreams and aspirations are insignificant compared to the expanse of the world and dismisses his own needs in a sense of awe for the sheer beauty of nature and being. Perhaps because of his melancholy this is why Keats finally sees himself as insignificant and his thoughts futile. The conflict shown in this poem is one of significance. The significance of his thoughts when compared to the natural world - his desires for fame and worries about not achieving it are unimportant when compared to the vastness of life. In 'Ode To A Nightingale' he is in conflict between both the beauty and despair that life can bring and the feeling that it would be 'rich to die' but, alternatively, that he would be unable to appreciate beauty if he was so and be unable to experience the 'ecstasy' of the nightingale's 'high requiem'. ...read more.

This word doubling sounds almost like the mournful tolling of a bell ringing out with the repeated 'or' sounds, into the empty space that follows. It also demonstrates a change in rhythm leading the reader to almost stumble and pause. Overall the stanza allows Keats to wake up to his senses and wonder as to whether his vision was all just a dream. It also is as if he is waking from his intoxicated state and returning to the real world. The rhyming couplet at the end of 'When I Have Fears' is similar to the last stanza of "Ode to a Nightingale" in that Keats changes the style of the poem. Similarly to 'Ode To a Nightingale' he uses a pause before the final lines. 'Of unreflecting love! -' The poem then moves on to discuss the insignificance of this compared to the 'wide world'. Overall Keats shows his personal concerns in "Ode to a Nightingale" and "When I Have Fears" in many different ways: firstly by using a vast array of poetic techniques, particularly his naturalistic imagery and secondly by the very meaning behind the poems. Keats knew that he would die of consumption and both poems show how he realises this fact. He was also in a deep state of melancholy when he wrote his poems, and this would well describe Keats' need to leave his life, and how he fears that he will never do all the things that he set out to do in life. ...read more.