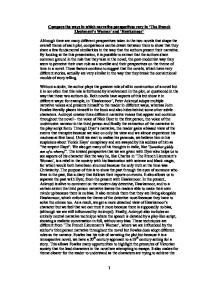 Compare the ways in which narrative perspectives vary in 'The French Lieutenant's Woman' and 'Hawksmoor'.

Compare the ways in which narrative perspectives vary in 'The French Lieutenant's Woman' and 'Hawksmoor' Although there are many different perspectives taken in the two novels that shape the overall theme of each plot, comparisons can be drawn between them to show that they share a few fundamental similarities in the way that the authors present their narrative. By looking at the this presentation, it is possible to extract that the authors share common ground in the role that they take in the novel, the post-modernist way they seem to perceive their own role as a novelist and their perspectives on the theme of time in a novel. These factors combine to suggest that the novels, which have very different stories, actually are very similar in the way that they break the conventional moulds of story telling. Without a doubt, the author plays the greatest role of all in construction of a novel but it is not often that this role is furthered by involvement in the plot, or questioned in the way that these two authors do. Both novels have aspects of this but show it in different ways: for example, in 'Hawksmoor', Peter Ackroyd adopts multiple narrative voices and presents himself to the reader in different ways, whereas John Fowles literally places himself in the book and also hides behind some other subtle characters. Ackroyd creates three different narrative voices that appear and continue throughout the novel - the voice of Nick Dyer in the first person, the voice of the unobtrusive narrator in the third person and finally the extraction of the narrative in the play script form. Through Dyer's narrative, the reader gains a biased view of the events that transpire because we take on only his view and we almost experience his madness at first hand. Until we start to realise his paranoia, we believe him in his suspicions about Yorick Hays' conspiracy and are swayed by his address of him as "the serpent Hays". ...read more.

He is also unreliable in his presentation of the multiple endings of the book. When he appears to have finished the novel at chapter 44, he goes on to reveal himself in chapter 45: "I had better explain that although all that I have described in the last two chapters happened, it did not happen quite in the way you may have been led to believe." This allows him to continue with his alternate ending of the novel but also makes us wary of the 'truth' about what Charles really did and how the novel will end. The unconventional elements that these novels share all contribute to a post-modernist self-consciousness that is clear in the narrative. The inter-textual styles of the two authors is no exception as they refer to other existing works of fiction, breaking the sense of reality about the stories by reminding the reader that this novel is fictional too. Interestingly, both novels refer to the same 'Faust' myth or one of the variations of the myth in text form. In 'Hawksmoor', both Dyer and the modern day Thomas Hill read it. This seems to be some reference to the dark side of the novel because the myth is that Dr Faustus sells his soul to the devil for earthly power and riches, which intrigues both Nick and Tom. In 'The French Lieutenant's Woman' it is referred to in the context of Sam's betrayal of his master, using the moral tale behind the Faust myth. There is far more inter-textuality in 'The French Lieutenant's Woman' than in 'Hawksmoor', as Fowles uses epigraphs at the beginning of every chapter, normally taken from non-fictional or fictional literature from the Victorian era, for example, Hardy, Tennyson and Darwin. These often pre-empt what will happen or promote some theme that is surfacing in the novel. Fowles also refers to the La Ronci�re Trial, a real life documented trial that Dr Grogan uses to show Charles that there are other manipulative woman like Sarah. ...read more.

A statement about Hawksmoor's state of mind sums this up: "At such times the future became so clear that it was as if he were remembering it, remembering it in place of the past which he could no longer describe. But there was in any case no future and no past, only the unspeakable misery of his own self." Ackroyd seems to be suggesting that the past, present and future are limitless and this is very different to his post-modernistic approach to breaking the other conventional moulds of writing. The effect that Fowles' manipulation of time has is less important than Ackroyd's because Fowles has so frequently reminded us that 'The French Lieutenant's Woman' is a work of fiction, so he can take us where he wishes. In conclusion, the perspectives that the authors take are unconventional in the way that they present the narrative, the way that they view their role in the novel and they way that they treat time in their novels. Most of the unconventional aspects suggest that both novels exhibit many signs of post-modernism. However, 'The French Lieutenant's Woman' is clearly more deliberate about the way it breaks the conventional 'rules' of a novel and adopts a post-modern perspective. Due to this, Fowles not only breaks the rules, but constantly contradicts them and calls them into question, making the narrative unclear. On the other hand, 'Hawksmoor' does not show all the signs of a post-modern novel and when Ackroyd breaks rules, he does not share it with the reader in the same way as Fowles, nor does he leave unanswered questions about his power. He does, however, leave unanswered questions in his plot and raises questions about time, which seems to be the predominant theme. Some novels may change the reader emotionally or may change their opinions but the varying perspectives that these two writers take, have big impact on the way that the reader approaches the novels. This is very useful for the novelists because it means that they can shape not only what the reader receives but also how they receive it. 1 ...read more.