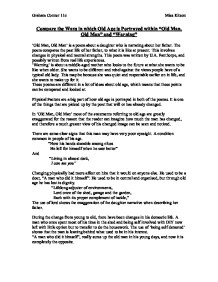 Compare the Ways in which Old Age is Portrayed within &quot;Old Man, Old Man&quot; and &quot;Warning&quot;

Compare the Ways in which Old Age is Portrayed within "Old Man, Old Man" and "Warning" 'Old Man, Old Man' is a poem about a daughter who is narrating about her father. The poem compares the past life of her father, to what it is like at present. This involves changes in physical and mental strengths. This poem was written by U.A. Fanthorpe, and possibly written from real life experiences. 'Warning' is about a middle-aged mother who looks to the future at what she wants to be like when older. She wants to be different and rebel against the views people have of a typical old lady. This may be because she was quiet and respectable earlier on in life, and she wants to make up for it. These poems are different in a lot of ideas about old age, which means that these points can be compared and looked at. Physical Factors are a big part of how old age is portrayed in both of the poems. It is one of the things that are picked up by the poet that will or has already changed. ...read more.

This is different to 'Old Man, Old Man" as here she is trying to improve and blossom in her old age, instead of the old man who slowly deteriated during the years. This will be the chance for Joseph to do what she really wanted to do. When at old she shall use it as a chance for her and her husband to be free, to do the opposite to what is expected and to be shocking to others around. This includes in a number of areas; dress, the spending of money and generally behaviour to those close and in public. She is really trying to break free from the usual stereotype that is given to the elderly. "When I am an old woman I shall wear purple With a red hat, which doesn't go, and doesn't suit me" There is hardly anything that has changed in the physical aspects of being old in 'Warning', but there is plenty of change mentally. She wants to be stupid now and not be responsible, as before, she was sensible and she did act like an adult. ...read more.

"The jokes you no longer tell, as you forget If you've smoked your timetabled cigarette" "Now television has no power to arouse Your surliness" Through the years not everything has changed in the old man. It is obvious that the man is still frustrated. He is also very self reliant, although he does need his daughter more often, an example being Drury Lane. This is the opposite in 'Warning', here she can't want to change, she wants to. She used the words "I shall" over and over again to show how determined she is of changing so. "And" repetition shows how excited she is to become old. In conclusion, by comparing these two poems it meant comparing two very different views and ideas of how old aged is portrayed. In 'Old Man, Old Man' old age is like the beginning of the end of life as in 'Warning' Joseph puts the idea that old age is a new beginning for her, and therefore the poem is more optimistic to the reader. There are few comparisons that can be made between the two poems, but there are some in that at old age there is a change of some kind. Graham Conner 11c Miss Kitson ...read more.