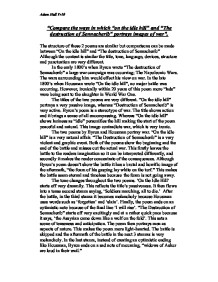 This sets a scene of tenseness and anticipation. The poem then portrays men as aspects of nature. This makes the poem more light-hearted. The battle is skipped and the aftermath of the battle in the next 3 stanzas is very melancholy. In the last stanza, instead of creating an optimistic ending like Housman, Byron ends on a sad note of mourning, "widows of Ashur are loud in their wail." "On the Idle hill" uses very simple vocabulary whereas "The destruction of Sennacherib" uses rather complicated words to create importance and boldness, 'Cohorts were gleaming'. In both of the poems there is a lot of emphasis on nature. "On the idle hill" describes nature, 'flows of streams' whereas "Destruction of Sennacherib" uses nature to describe situations and things, 'Like the leaves of the forest when summer is green'. This quote is comparing the fresh, young soldiers to the new, green leaves. ...read more.

Both of the poems conclude in a very different way. "On the Idle hill" finishes with two war instruments calling back from the battle. This may be reflecting back to the initial dreamy state. When it says, 'woman bore me, I will rise' it can be read in many different ways. It can be read into as a warning that war may rise again because it is inevitable. Or it can alternatively be read as there being a female influence in nature that will rise up. Altogether it is a positive ending that shows Humanity versus evil. "The Destruction of Sennacherib" has a very religious ending. It ends with the all the soldiers dead. God killed the Assyrians because they killed the holy people. There is a strong reference to nature that may be a reference to God, 'Hath melted like snow'. Both of the poems are ended extremely differently, "On the idle hill" is optimistic and "Destruction of Sennacherib" is pessimistic. Adam Hall 934 words Adam Hall Yr10 ...read more.