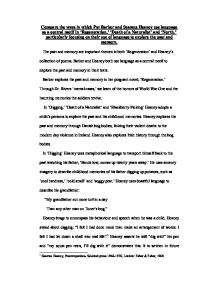 Compare the ways in which Pat Barker and Seamus Heaney use language as a central motif in 'Regeneration,' 'Death of a Naturalist' and 'North,' particularly focusing on their use of language to explore the past and memory.

Compare the ways in which Pat Barker and Seamus Heaney use language as a central motif in 'Regeneration,' 'Death of a Naturalist' and 'North,' particularly focusing on their use of language to explore the past and memory. The past and memory are important themes in both 'Regeneration' and Heaney's collection of poems. Barker and Heaney both use language as a central motif to explore the past and memory in their texts. Barker explores the past and memory in her poignant novel, 'Regeneration.' Through Dr. Rivers 'mental cases,' we learn of the horrors of World War One and the haunting memories the soldiers revive. In 'Digging,' 'Death of a Naturalist' and 'Blackberry-Picking' Heaney adopts a child's persona to explore the past and his childhood memories. Heaney explores the past and memory through Danish bog bodies, linking their violent deaths to the modern day violence in Ireland. Heaney also explores Irish history through the bog bodies. In 'Digging' Heaney uses metaphorical language to transport himself back to the past watching his father, 'Bends low, comes up twenty years away.' He uses sensory imagery to describe childhood memories of his father digging up potatoes, such as 'cool hardness,' 'cold smell' and 'soggy peat.' Heaney uses boastful language to describe his grandfather: "My grandfather cut more turf in a day Than any other man on Toner's bog." Heaney brags to encompass his behaviour and speech when he was a child. Heaney stated about digging: "I felt I had done more than make an arrangement of words: I felt I had let down a shaft into real life".1 Heaney asserts he will "dig with" his pen and "my squat pen rests, I'll dig with it" demonstrates this. It is written in future tense; perhaps meaning Heaney will continue to "dig" into his memories throughout the 'Death of a Naturalist' collection. Heaney uses a direct link to memory, 'living roots awaken in my head.' ...read more.

River's experiences nightmares at Craiglockhart as a result of spending too much time with patients suffering from neurasthenia. In his dreams he remembers how he experimented with his friend Henry Head. He severed Head's 'radial nerve' and then recorded the progress. They hoped that the nerve would regenerate. This moment confirms to the reader that regeneration is the central metaphor in the novel. Psychoanalytical theorists believe that dreams are subconscious fears or desires. River's dreams that he is causing pain, this could be interpreted that he is afraid of hurting his patients by his experimental method of curing patients by making them retell what happened to them in the trenches. River's feels "the emphasis in the dream had been on the distress he felt at causing pain, and on waking, the affect had been one of fear and dread." Another example in the novel of memory is when River's remembers about his fathers' treatment of his stammer. River's states "... the relationship between father and son is never simple, and never over. Death certainly doesn't end it." I believe this concurs with Heaney's poem "Digging." He also looks into his past and sees his father indicating that the bond between father and son is strong. Another poem Heaney links to memory is 'Punishment.' Heaney compares a bog body to three Irish sisters who were tarred and feathered by the IRA because they had dated British soldiers. Heaney was said to have witnessed this act of violence. He links the torture of the bog body to the torture of the sisters in Belfast. Heaney writes this poem in the present tense, however, the narration shifts between first and second person. The speaker in this poem has a very close relationship with the bog girl, "I can feel the tug..." Heaney uses a detailed, graphic simile to describe the bog body: "her shaved head like a stubble of black corn." ...read more.

In the 'Death of a Naturalist' collection, there is a general metaphor of the death of Heaney's childhood, as he progresses into adulthood; the very title 'Death of a Naturalist' signifies the death of his younger self, and fascination of nature. The semantic field of nature reinforces the idea of the cycle of life, as nature constantly grows as seen in 'Requiem for the Croppies', as "the barley grew out of the grave", symbolising that, despite loss through death, there is still hope for the regeneration of life. The repetition of "mud" and "peat" in Heaney's poetry symbolises how nature has perfectly preserved the bog bodies. The mud seems to symbolise identity as it gives the bodies a "peat-brown" colour, as if they are a part of the earth. Mud also represents the growth and healing of life, as "long roots" grow from the "soft mulch". This positive attitude towards the peat is directly contrasted in 'Regeneration', as "mud" is most associated with death. Nature is almost portrayed as another enemy on the fields: Burns describes when "mud dragged at him", which he remembers from "his aching thighs", even as "his mind was incapable" of remembering. There is another reference to death, created by the appearance of the "coffin-like trenches"; it is as if the men are buried under the earth. There is a juxtaposition of blood and mud, which is particularly emphasised when Anderson describes the mud, "six inches thick," which concealed the "Frenchman's" wound. Barker and Heaney both have different styles of writing; however I think that both writers are highly effective at unearthing the past through vivid language. There is no doubt that language is a central motif in 'Regeneration' and Heaney's collection of poems. Word count: 3249 1 Seamus Heaney, Preoccupations- Selected prose 1968-1978, London: Faber & Faber, 1980 2 Samuel Hynes, New York Times - Book Review, March 29th 1992 3 K Kellaway - 'Billy, don't be a hero.' The Observer August 1995 4 Francis Spufford - Exploding old myths, an interview with Pat Barker, The Guardian 5 David Morgan ?? ?? ?? ?? ...read more.