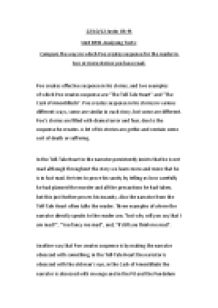 Compare the ways in which Poe creates suspense for the reader in The Tell-Tale Heart and The Cask of Amontillado.

﻿22/10/12 Justin Oh 9S Unit B931 Analysing Texts: Compare the ways in which Poe creates suspense for the reader in two or more stories you have read. Poe creates effective suspense in his stories, and two examples of which Poe creates suspense are ?The Tell-Tale Heart? and ?The Cask of Amontillado?. Poe creates suspense in his stories in various different ways, some are similar in each story, but some are different. Poe?s stories are filled with drama terror and fear, due to the suspense he creates. A lot of his stories are gothic and contain some sort of death or suffering. In the Tell-Tale Heart in the narrator persistently insists that he is not mad although throughout the story we learn more and more that he is in fact mad. He tries to prove his sanity by telling us how carefully he had planned the murder and all the precautions he had taken, but this just further proves his insanity. Also the narrator from the Tell-Tale Heart often talks the reader. Three examples of where the narrator directly speaks to the reader are, ?but why will you say that I am mad??, ?You fancy me mad?, and, ?if still you think me mad?. ...read more.

Poe uses repetition many times in the story, and the technique is used as each use of repetition helps contribute to adding more atmosphere to the story, adding to the suspense and fear that we already feel. When they are used, the story slows down slightly, which makes our anticipation for finding out what happens next grow, and this pulls us further into the story, making us read on. In the Tell-Tale Heart, as the story is a 1st person account of the event, thinking solely about its use in the plot, it helps underline how detailed the narrator is in his details and how much he obsessed over the murder. ?With what caution -- With what foresight -- With what dissimulation?, ?How stealthily, stealthily?, and, ?Louder! Louder! Louder! Louder!? In the Cask of Amontillado and the Tell-Tale Heart the protagonist likes to toy with the victim, which they are about to kill. For example in the Cask of Amontillado the protagonist, Montressor, gets out a trowel, which later on that would be the murder weapon, It is this," I answered, producing a trowel from beneath the folds of my roquelaire. ...read more.

Montresor, on the other hand, does not get caught, and lives with no one knowing. Montresor is not burdened by accusations of madness like the other narrator is; in "The Tell-Tale Heart," it seems like the entire purpose for telling the tale is to prove that he isn't insane. Montresor, on the other hand, just seems to want to tell the tale for the tale's sake, not to prove that he is sane. In Montresor's case there is hallucination of the beating heart to force him into confession; very little evidence of a guilty conscience is seen in Montresor. Poe created suspense in various effective ways, some are obvious to spot, and some are not. The Cask of Amontillado and the Tell-Tale Heart are two of his best stories in my opinion, they both create suspense in mostly different, although are very similar or the same. Poe?s stories are still popular today one reason for this could be because of the suspense that is present in his stories. I think one of the main reasons that Poe creates suspense is so that it drags the reader he so the reader would carry on reading. Justin Oh 9S Mr Beahan ...read more.