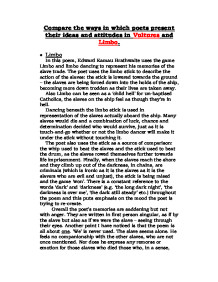 Compare the ways in which poets present their ideas and attitudes in Vultures and Limbo.

Compare the ways in which poets present their ideas and attitudes in Vultures and Limbo. * Limbo In this poem, Edward Kamau Brathwaite uses the game Limbo and limbo dancing to represent his memories of the slave trade. The poet uses the limbo stick to describe the action of the slaves: the stick is lowered towards the ground - the slaves are being forced down into the holds of the ship, becoming more down trodden as their lives are taken away. Also Limbo can be seen as a 'child hell' for un-baptised Catholics, the slaves on the ship feel as though they're in hell. Dancing beneath the limbo stick is used in representation of the slaves actually aboard the ship. Many slaves would die and a combination of luck, chance and determination decided who would survive, just as it is touch-and-go whether or not the limbo dancer will make it under the stick without touching it. ...read more.

Another point I have noticed is that the poem is all about one. 'We' is never used. The slave seems alone. He feels no companionship with the other slaves, who are not once mentioned. Nor does he express any remorse or emotion for those slaves who died those who, in a sense, touch the stick (as in a game of limbo). He talks only about I, himself. He survives alone. When the slaves reach the shore of the 'new world' where they would be working on the sugar plantations the slave steps onto the 'burning ground', so in a sense escaping from the ship and starting a fresh life. The poem is set out in 2 columns with 2 lines grouped together. The poem has a chant like rhythm, like a song. The poet uses a lot of repetition in the poem, and also the incorrect word order and layout of the words I think emphasises the language barrier the slaves were faced with. ...read more.

The poet uses a lot of comparison in this poem, unlike Limbo, as he describes the vultures and humans. The poet lived during a civil war so witnessed first hand the destruction that can be caused, unlike Edward Brathwaite who is writing from stories. Chinua looks deeply into the question of love and hate, the rivalry between the two in this world. The poem poses the question of whether even an inhuman ogre could possibly have some love or compassion, ('Praise bounteous providence if you will that grants even an ogre a tiny glow-worm tenderness encapsulated in icy caverns of a cruel heart....') but in Limbo the slave masters seem to be portrayed as evil, human beating monsters and does not even beg the question of whether they could be good. The poet in Vultures, uses metaphors in the poem between the Commandant at Belsen and the vultures, and compares the way they both pray off humans then show love and affection for something else. E.g. the Commandants offspring (child), the vultures mate. ...read more.