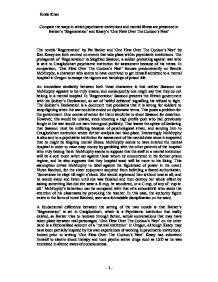 Compare the ways in which psychiatric institutions and mental illness are presented in Barker's 'Regeneration' and Kesey's 'One Flew Over The Cuckoo's Nest'.

Compare the ways in which psychiatric institutions and mental illness are presented in Barker's 'Regeneration' and Kesey's 'One Flew Over The Cuckoo's Nest' The novels 'Regeneration' by Pat Barker and 'One Flew Over The Cuckoo's Nest' by Ken Kesey are both centred on events that take place within psychiatric institutions. The protagonist of 'Regeneration' is Siegfried Sassoon, a soldier protesting against war who is sent to Craiglockhart psychiatric institution for assessment because of his views. In comparison, 'One Flew Over The Cuckoo's Nest' focuses predominantly on Randle McMurphy, a character who seems to have contrived to get himself admitted to a mental hospital in Oregon to escape the rigours and hardships of prison life. An immediate similarity between both these characters is that neither Sassoon nor McMurphy appears to be truly insane, and consequently one might say that they do not belong in a mental hospital. In 'Regeneration' Sassoon presents the British government with his Soldier's Declaration, an act of 'wilful defiance' signalling his refusal to fight. The Soldier's Declaration is a document that proclaims that it is wrong for soldiers to keep fighting when the war could be ended on diplomatic terms. This poses a problem for the government. One course of action for them would be to shoot Sassoon for desertion. However, this would be unwise, since shooting a high profile poet who had previously fought in the war would not earn them good publicity. That leaves the option of declaring that Sassoon must be suffering because of psychological strain, and sending him to Craiglockhart institution where further analysis can take place. Interestingly McMurphy is also sent to a psychiatric institution for assessment of his mental state since it suspected that he might be feigning mental illness. McMurphy seems to have entered the mental hospital in order to make easy money by gambling with the other patients of the hospital who truly belong there. ...read more.

'And I'm just about to go on and tell them, how, if they'll come on in, I'll go get Papa off the scaffolds of the falls, when I see that they don't look like they heard me talk at all.' From this realisation, the Chief's deaf and dumb act is born, in order to withdraw attention from himself. A side effect of his conduct however is that it allows him access to all conversations and events to which other patients on the ward are not privy. For example, at one point in the novel, the chief is cleaning the room during one of the board meetings about McMurphy and he is able to absorb much information about the staff's thoughts and opinions of the newest arrival on the ward. The Chief's delusions are mirrored with Siegfried Sassoon's hallucinations in Regeneration; however, the Chief tends to exaggerate size and sound, while Sassoon hallucinates about mutilated corpses walking around him. Sassoon hallucinations originated from his wartime experiences and seeing so many dying soldiers, in both action and in the hospitals while he was injured. The Chief's paranoia may have originated from him having to live in fear of the government who had driven him out of his home, constantly thinking that the 'Combine' is out to get him. His paranoia is a symptom of his mental illness The patients of nurse Ratched's ward, particularly the acute patients, form a close bond against nurse Ratched after McMurphy's arrival. He challenges the nurse's authority and shows the other patients that she can be defeated, for example, the incident in which McMurphy gained access for the patients into the Tub Room to play cards. The idea was backed by the resident Dr Spivey 'so how would the group like to have the tub room as a sort of second day room, as game room shall we say?'. Because it was presented to the nurse by Dr Spivey, it carried a certain weight, which she could not easily dismiss, so the idea was carried. ...read more.

The party is not sanctioned by the nurse who has no idea of its taking place, so McMurphy knows that he must leave otherwise he will be punished severely for his actions. On the night of the party McMurphy organises for a girl to come onto the ward and make love to Billy Bibbit, making him lose his virginity. McMurphy's plan of escape fails and the nurse returns in the morning to find the atrocities that have taken place on her ward. She confronts Billy Bibbit about his actions, and he seems confident, however once the nurse threatens to informs Billy's mother of his wrong doing Billy breaks down and pleads with her not to do so. '"Nuh! Nuh!" His mouth was working. He shook his head, begging her. "You d-don't n-n-need!"' Billy is so disturbed by the prospect of his mother finding out about his actions, that he takes his own life shortly after the nurse confirms that she will inform his mother. After this event, the ward changes dramatically. Patients who were not committed begin to leave; Sefelt, Frederickson, even Harding. McMurphy was taken away for a lobotomy, which succeeded in calming him down, but it did so to the point where he would not fit the description of a mentally ill patient, but more of a breathing corpse. The Chief cannot stand to look at this change in McMurphy so he resorts to suffocating him in order to put out his suffering once and for all. On doing so, the Chief escapes the ward by picking up the control panel in the tub room and throwing it through the window. This mirrors the event where McMurphy attempted to lift the control panel, the difference being that the Chief succeeded where McMurphy failed by learning from him. This event is a representation of the book as a whole, where one man's titanic struggle and failure managed to stimulate another man's will to live, and as one circle of life draws to a close, a new one begins. Emile Khan - 1 - ...read more.