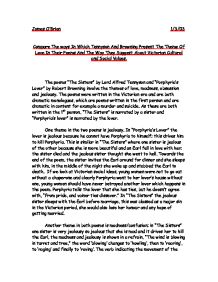 Compare The ways In Which Tennyson And Browning Present The Theme Of Love In Their Poems And The Way They Suggest About Victorian Cultural and Social Values.

James O'Brien 1/3/03 Compare The ways In Which Tennyson And Browning Present The Theme Of Love In Their Poems And The Way They Suggest About Victorian Cultural and Social Values. The poems "The Sisters" by Lord Alfred Tennyson and "Porphyria's Lover" by Robert Browning involve the themes of love, madness, obsession and jealousy. The poems were written in the Victorian era and are both dramatic monologues, which are poems written in the first person and are dramatic in content for example a murder and suicide. As these are both written in the 1st person, "The Sisters" is narrated by a sister and "Porphyria's lover" is narrated by the lover. One theme in the two poems is jealousy. In "Porphyria's Lover" the lover is jealous because he cannot have Porphyria to himself; this drives him to kill Porphyria. This is similar in "The Sisters" where one sister is jealous of the other because she is more beautiful and an Earl fell in love with her; the sister died and the jealous sister thought she went to h**l. ...read more.

a refrain, "The wind is blowing in turret and tree," the word 'blowing' changes to 'howling', then to 'roaring', to 'raging' and finally to 'raving'. The verb indicating the movement of the wind makes it fiercer and stronger as the poem progresses, which symbolises that her jealousy and madness becomes stronger and fiercer each time. Once the sister kills the Earl the verb returns to 'blowing'. This is similar in "Porphyria's Lover"; the lover is narrating in one long flowing passage, unlike "The Sisters" where it is written in progressive stanzas. The sentence length becomes shorter and more erratic. This shows the lover's state of mind. Just before he kills Porphyria, his sentences are very short. This symbolises that he is not mad but confused and he strangles her with her own hair. One reason for this could be because there is some s****l tension between the two of them, when Porphyria enters her lover's house she takes off her wet clothes very slowly and it is described by Browning very erotically. ...read more.

The murders in the poems were premeditated, the sister plans to kill the Earl when he went for dinner, and Porphyria's lover says,"While I debated what to do." This is especially chilling as he loves Porphyria and because of a brief moment of insanity, he kills her. I think that Browning and Tennyson make the murders premeditated as in the Victorian period they liked to read of murder and horror stories, they also liked the idea of melodrama which these two plays are. Melodramatic literature is stories poem etc... that deals with men and women at critical moments in their relationships. The poems are also dramatic dealing with events like murder, victims, rejected lovers etc... I liked these two poems because they involve murder and love, but I especially like "The Sisters," because the woman is the murderer and the Earl is the victim, this I especially enjoyable because normally poems, stories and other literature are stereotypical making the male the murderer. In conclusion Browning and Tennyson present the theme of love in their poems using dramatic monologues and melodrama which were greatly liked during the oppressive Victorian period. ...read more.