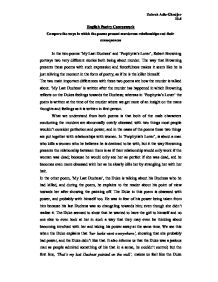 Compare the ways in which the poems present murderous relationships and their consequences In the two poems 'My Last Duchess' and 'Porphyria's Lover', Robert Browning

English Poetry Coursework Compare the ways in which the poems present murderous relationships and their consequences In the two poems 'My Last Duchess' and 'Porphyria's Lover', Robert Browning portrays two very different stories both being about murder. The way that Browning presents these poems with such expression and forcefulness makes it seem like he is just reliving the moment in the form of poetry, as if he is the killer himself. The two main important differences with these two poems are how the murder is talked about. 'My Last Duchess' is written after the murder has happened in which Browning reflects on the Dukes feelings towards the Duchess; whereas in 'Porphyria's Lover' the poem is written at the time of the murder where we get more of an insight on the mans thoughts and feelings as it is written in first person. What we understand from both poems is that both of the male characters conducting the murders are abnormally overly obsessed with two things most people wouldn't consider perfection and power, and in the cases of the poems these two things are put together with relationships with women. In 'Porphyria's Lover', is about a man who kills a women who he believes he is destined to be with, but it the way Browning presents the relationship between them is as if their relationship would only work if the woman was dead; because he would only see her ...read more.

showing that he felt like an object being act upon as if he was a dummy and couldn't do anything for himself. However, this all changes once Porphyria's is murdered and we see this when the guy notes how he 'propp'd her head up as before' showing that he is now the one in control and it appears that he has now become 'alive' and becomes the active whereas Porphyria's is now the passive. The guy in this poem comes across as proud and we can demonstrate this when he tells the reader 'Porphyria worshipp'd me,'; which is almost as if he should be looked up to like some sort of God and only sees things in his point of view. This is also demonstrated at the very end of the poem, 'And yet God has not said a word!' This signals that he really truly believes that he is in the right. Browning also may have used this line as a symbol to say that if there really was a God, he would have done something to the guy as a punishment, but nothing has been done. This leads on to say that neither of the men in the poems think they've done anything wrong and appear to have no remorse what so ever for the crimes they have committed; and we see this all through 'My Last Duchess' as we imagine him as being proud of himself all through the poem. ...read more.

But in 'Porphyria's Lover' it's the guys feelings towards Porphyria that become so strong and unable to control, which leads him to murder her to have her forever. We see that he is overly obsessed with Porphyria when he leads himself to think, 'at last I knew Porphyria worshipp'd me,' when really the reader knows that this isn't the case, and the reader continues to see the increasingly unbalanced state of the man that Browning portrays. In this poem there are many metaphors and it's full with personification. An example of this is when Browning explains to us about how the 'sullen wind was soon awake', as we get to know that there is a storm outside. As we progress through the poem we come to understand that the storm could symbolize the storm in the guys head. Browning also uses alliteration a great deal throughout the poem, so much that this also symbolises how much of a mad and unbalanced mind this guy has. For example, we see this alliteration when he is explaining how Porphyria 'Blushed bright beneath my burning kiss' and he tries to make it seem as if she is enjoying his 'burning' kiss, so much that she starts to blush even though she's dead. This also represents that he still thinks of her being alive and happy. ?? ?? ?? ?? Zohreh Adle-Ghadjar 10.4 ...read more.