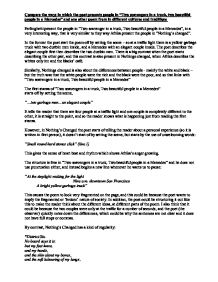 Compare the ways in which the poet presents people in &quot;Two scavengers in a truck, two beautiful people in a Mercedes&quot; and one other poem from in different cultures and traditions

Compare the ways in which the poet presents people in "Two scavengers in a truck, two beautiful people in a Mercedes" and one other poem from in different cultures and traditions Ferlinghetti present the people in "Two scavenger in a truck, Two beautiful people in a Mercedes", in a very interesting way, that is very similar to they way Afrika present the people in "Nothing's changed". In the former the poet start the poem off by setting the scene - so at a traffic light there is a yellow garbage truck with two dustbin men inside, and a Mercedes with an elegant couple inside. The poet describes the elegant couple first then describes the two dustbin men. There is a big contrast when the poet starts describing the other pair, and this contrast is also present in Nothings changed, when Afrika describes the whites only inn and the blacks' caf�. Similarly, Nothings changed is also about the differences between people - mainly the white and black - but the truth was that the white people were the rich and the black were the poor, and so that links with "Two scavengers ...read more.

By contrast, Nothing's Changed has a kind of regularity: "District Six. No board says it is: but my feet know, and my hands, and the skin about my bones, and the soft labouring of my lungs, and the hot, white, inwards turning anger of my eyes." This creates a sense of control and that the poet is very clear about his feelings, not suddenly going into a rage. Both poems are written in present tense: "And both scavengers gazing down" (Two scavengers in a truck, Two beautiful people in a Mercedes) "I press my nose" (Nothing's Changed) Ferlinghetti writes in the present tense to hive the reader a sense of immediacy and that the events are happening now. But from a wider perspective it also could suggest the huge gap between the rich and the poor. In "Nothing's Changed", however, Afrika does not use the present tense to show that the events are happening now, but to recall a past experience - as if the poet is re-living the experience as he writes. ...read more.

Then the he changes into a sombre, muted tone: "And two scavengers up since four a.m./grungy from their route" This tone is created because Felinghetti want to show that he is sad that a gap remains between the rich and poor. Finally, nearer to the end the poet shows a loud and angry attitude: "Across the small gulf/in the high seas/of this democracy" The poem is ended using this tone to show the poets attitude to protest the failure of democracy. The start of Nothing's Changed is an angry start: "Small round hard stones click" This suggests the poet is angry that nothing has changed, (his use of monosyllabic word give the sense of heart beat and rhythm which shows is growing anger). But at the end of the poem the writes a stanza to show that he is hopeless and ends the poem with: "Nothing's Changed" emphasising his resigned tone that it is almost too much to hope that things can change. The poet presents the people in these two poems in a very similar way, even though the structure, punctuation and images are quiet different. Both poets are angry about the difference between rich and poor, but Afrika concentrates more on the difference of Blacks and Whites. ...read more.