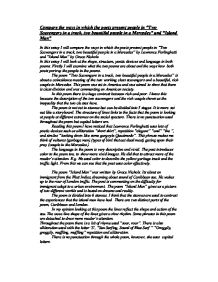 Compare the ways in which the poets present people in &quot;Two Scavengers in a truck, two beautiful people in a Mercedes&quot; and &quot;Island Man&quot;

The structure of lines links to the facts that the poem is looking at people at different extremes on the social specters. There is no punctuation used throughout the poem but capital letters are. Reading this poem I have noticed that Lawrence Ferlinghetti uses lots of poetic devices such as alliteration "short skirt", repetition "elegant" "and" "the", and similes "looking down like some gargoyle Quasimodo". This phrase makes me think of vultures (garbage men) (types of bird that eat dead meat) gazing upon their pray (couple in the Mercedes.) The language in the poem is very descriptive and vivid. The poet introduces color to the poem too, to show more vivid images. He did that to attract more of the reader's attention. ...read more.

There are two distinct parts of the poem, Caribbean and London. In my opinion looking at this poem the lines reflect the shape and action of the sea. The wave line shape of the lines gives a slow rhythm. Some phrases in this poem are detached to draw more reader's attention. Throughout the poem there is a bit of rhyme used "soar, roar". There is also alliteration used with the letter 'S', "Sun Surfing, Sound of Blue Surf" "Groggily, groggily, muffling, muffling" repetition and alliteration. There is no punctuation through the whole poem, however, she uses capital letters. Reading these two poems I have noticed that they present people but in every different circumstances and for different reasons. However, the messages are very different. Both poems use shape imaginatively but on the other hand both poems are very different. By Yuliya Boychuk 10P ...read more.