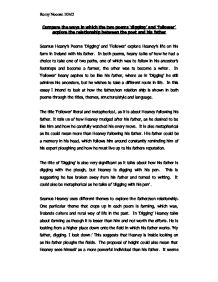 Compare the ways in which the two poems 'digging' and 'follower' explore the relationship between the poet and his father Seamus Heany's Poems 'Digging' and 'Follower' explore Heaney's life on his farm in Ireland with his father. In both poems, heany talks of how he had a choice to take one of two paths, one of which was to follow in his ancestor's footsteps and become a farmer, the other was to become a writer. In 'Follower' heany aspires to be like his father, where as in 'Digging' he still admires his ancestors, but he wishes to take a different route in life. In this essay I intend to look at how the father/son relation ship is shown in both poems through the titles, themes, structure/style and language. The title 'Follower' literal and metaphorical, as it is about Heaney following his father. It tells us of how Heaney trudged after his father, as he desired to be like him and how he carefully watched his every move. It is also metaphorical as its could mean more than Heaney following his father. His father could be a memory in his head, which follows him around constantly reminding him of his expert ploughing and how he must live up to his fathers reputation. ...read more.

In 'Digging' Heany has uses generations as another theme, in this he explores his ancestors contributions towards the farming world and admires there progressions. He talks of how his grandfather ploughed by hand and could 'cut more turf in a day // Than any other man' This quote tells us that Heaney still had immense pride in his family, but he did not want to carry on the family traditions of farming. This also ties in with the theme of occupations, as Heaney aspired to become a writer rather than farm. Heaney describes his pen as 'as snug as a gun'; this suggests that his pen is meant to rest in his hand, not a spade. Also the reference to the gun could indicate that he has feels more powerful writing than he does farming, he has enough power to seek a new life away from rural country life. Heaney has structured his poems in different sections to show different stages of his life, and different stages in his relation ship with his father. In 'Follower' Heaney talks of how his relationship with his father progresses from being a small child, to being a young adult and able to work for himself. ...read more.

This is the same as 'Digging' because Heaney uses farming related vocabulary again to show his love of his father's skills. 'Follower' also uses some enjambment, as he breaks up one line and puts different parts of it into a new verse. This is shown in stanza 4-5. These two lines of the poem mimic the movement of the reins and the plough, as it is turning round at the end of the field to continue the farming process. In stanza 1, Heaney talks of how his father shoulders were 'like a full sail strung'; this is a simile as it is using a sail to give you the impression of how his father's shoulders are globed. It also is suggesting that his father is a voyager as full strung sails tend to be used when travelling the seas. In stanza 5, the poet uses Caesuras to put an emphasis on Heaney's respect and idolisation for his father by using shorter sentences and stopping the flow of the line to give the words a stronger mood and impact. In 'Digging' Heaney uses lots of onomatopoeic words and sensory language. It gives the reader a clear vivid picture of how exactly Heaneys father was ploughing through the turf, this is done through sound and smell words such as 'Cold smell of mould' and 'squelch'. ...read more.