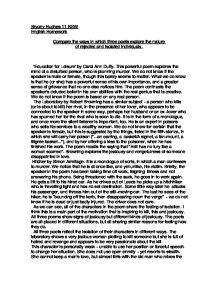 Compare the ways in which three poets explore the nature of rejected and isolated individuals.

Bryony Hughes 11 RSW English Homework Compare the ways in which three poets explore the nature of rejected and isolated individuals. 'Education for Leisure' by Carol Ann Duffy. This powerful poem explores the mind of a disturbed person, who is planning murder. We do not know if the speaker is male or female, though this barely seems to matter. What we do know is that he (or she) has a powerful sense of his own importance, and a greater sense of grievance that no one else notices him. The poem contrasts the speaker's deluded belief in his own abilities with the real genius that is creative. We do not know if the poem is based on any real person. The Laboratory by Robert Browning has a similar subject - a person who kills (or is about to kill) her rival, in the presence of her lover, who appears to be connected to the speaker in some way, perhaps her husband or an ex-lover who has spurned her for the rival who is soon to die. ...read more.

The driver does not care. As we can see, all of the characters in the poem share the feeling of isolation. I think this is a main part of the motivation that is inspiring to kill, this and jealousy. All three poems show signs of jealousy but different kinds of jealousy. The poets are all placed in different situations, but all sharing similar reasons for feeling how they do. All three poets reflect the isolation of their characters in different ways. The laboratory shows a very jealous woman plotting to kill someone but she is full of hatred and revenge and appears to be very passionate about the kill. This character is personally weak - unable to use her position or forceful speech to change her situation. She does not use open enmity - yet resorts to stealth. She cannot keep a man's love, but almost flirts with the old man who mixes the poison - she offers him a kiss, as if she were voluptuous and desirable, but we know that she cannot compete with her rival. ...read more.

On the other hand, they could be just as unstable. This poem shows us the prelude to violence, but does not describe any violence against a real human being - the ending hints at this. Perhaps what happens next depends on the choice of victim, as well as things we do not know - whether the speaker has the strength and speed to harm the victim, or even whether he or she has the resolution to kill. But perhaps this person does not need much resolution, since he or she seems not to care about others' feelings or even to be capable of connecting with other people. Therefore, all three characters are experiencing similar feelings and are placed in similar situations. They are also all using the same reason and have all turned to the same solution to make themselves happier. The three characters are very different, but the poems make the characters have something in common, they are all suffering from being isolated and rejected and are using the power to kill to make themselves feel better, yet they all handle it very differently. ...read more.