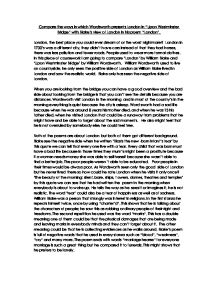 Compare the ways in which Wordsworth presents London in Upon Westminster Bridge with Blakes view of London in his poem London.

Compare the ways in which Wordsworth presents London in "Upon Westminster Bridge" with Blake's view of London in his poem "London". London, the best place you could ever dream of or the worst nightmare? London in 1700's was a different city, they didn't have cars instead of that they had horses, there was less pollution and fewer roads. People used to wear more formal clothes. In this piece of coursework I am going to compare 'London' by William Blake and 'Upon Westminster Bridge' by William Wordsworth. William Wordsworth used to live on countryside, he only seen the positive side of London as William Blake lived in London and saw the realistic world. Blake only has seen the negative side of London. When you are looking from the bridge you can have a good overview and the bad side about looking from the bridge is that you can't see the details because you are distances. Wordsworth visit London in the morning and in most of the country's in the morning everything is quiet because the city is asleep. ...read more.

He tells the way as he sees it or imagines it, he is not realistic. The word 'tear' could also be a tear of happiness as well as of sadness. William Blake was a person that strongly was interest in religions. In the first stanza he repeats himself twice, once by using "charter'd". This shows that he is talking about the characters of people; he saw this as robbing ordinary people of their right and freedoms. The second repetition he used was the word "marks". This has a double meaning one of them could be that the physical damages that are being made and leaving marks in everybody minds and they can't forget about it. The other meaning could be that he is collecting evidences as he walks around. Blake's poem is full of negative words that he used in every stanza such as "blood", "weakness", "cry" and many more. The poem ends with words "marriage hearse" for everyone marriage is such a great thing but he compared it to funerals. This might shows that he prefers to be lonely. ...read more.

'The beauty of the morning' is evidence for this. It is written in the 3rd person and is also in the present tense. This shows that it was happening as he was writing the poem. This also helps the reader to visualise what is happening and to understand the poem more. The sestet is about how the poet feels. Evidence for this is 'Ne'er saw I, never felt, calm so deep'. It is in the 1st person and is partially in the past tense, he shows positive language. Blake's format of the poem is like lyrics of a song. There are four stanzas, all of them shows different aspect of the city. Every single stanza talks about something else. His poem is like snapshots of loads of different scenes. In my opinion both of the poetess have right to give their own opinion, like every human being. William Blake showed the bad side of London and Wordsworth the good side, both of them has right to show the differences every person got different views for certain things. Blake was showing the negative things to show what makes him angry as Wordsworth has made his poem calm and enjoyable for everyone. Angelika Zadranowicz ...read more.