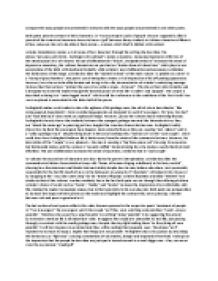 ﻿Compare the ways people are presented in Vultures with the ways people are presented in one other poem. Both poets present contrast in their characters: in ?Two Scavengers? pairs of people who are supposedly alike in pursuit of the American Dream are shown to have a ?gulf? between them; similarly in Vultures characters different at face value are shown to be alike in their nature ? a nature which itself is riddled with contrast. Achebe immediately creates a vivid sense of her characters through the setting she describes: the phrase ?greyness and drizzle...harbingers of sunbreak? creates a repulsive, menacing impression reflective of the stereotypical view of vultures. His use of alliteration for ?drizzle...despondent dawn? increases the sense of depressive monotony; the vultures themselves are perched on ?broken bone of a dead tree? which plays to our associations of the birds with death and brutality while Achebe?s use of alliteration and assonance symbolises the hollowness of the image. Achebe describes the ?bashed in head? of the male vulture: ?a pebble on a stem? in a ?dump of gross feathers?; the poet?s use of metaphor creates a vivid impression of his off-putting appearance. ...read more.

Despite being lower in the social rankings they ?look down? on the ?cool couple?, which could show how Ferlinghetti believes life is better away from the strain of the commercial rat race. However, his description of the ?couple? is very pleasant ? the man is wearing a ?hip three-piece suit? showing his expensive but fashionable tastes; and the woman is ?casually coiffed? demonstrating how she makes a careful hairstyle look effortless. The use of alliteration increases the sense of suaveness, similar to that in ?cool couple?. In Vultures the second set of characters are also vital to the poem?s interpretation. Achebe describes the commandant at Belsen Concentration Camp with ?fumes of human clinging rebelliously to his hairy nostrils?, showing how the atrocious smell taints him inextricably despite how he may behave elsewhere. He is personally responsible for the horrific death of Jews in the holocaust; no amount of ?chocolate? will redeem him, However by stopping at the ?way side sweet shop? for his ?tender offspring? Achebe illustrates a familiar ?kindred? love similar to that of the vultures. ...read more.

It also gives the impression that the people he describes are just specks tossed around in a much bigger sea ? they can never cross the oxymoronic ?small gulf?. By contrast in ?vultures? the nature of the characters is the wider message rather than just demonstrating it. On one hand Achebe tells us to ?praise bounteous providence? that even ?ogres? like the commandant have a ?tiny glow worm tenderness?; but he also concludes that is this ?gem of kindred love? which allows for the ?perpetuity of evil?. In other words he suggests that evil exists as we can persuade ourselves people aren?t as bad as they seem. Personally while I would agree whole-heartedly with Ferlinghetti?s anti-commercialist stance, I find Achebe?s perspective a little defeatist: I think human nature is inherently better than he depicts. Although ?Vultures? is incredibly evocative I relate more easily to ?Two Scavengers?. Both poems present the pitfalls and redeeming features of human nature through pairs of contrasting characters. However while Ferlinghetti is protesting against the nature of so-called ?democracy? and the ?small gulf? between social classes; Achebe depicts the split in the character of each human, in the battle between good and evil. ...read more.