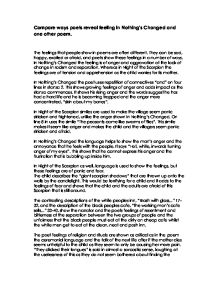 Compare the ways poets reveal emotion in Nothing

Compare ways poets reveal feeling in Nothing's Changed and one other poem. The feelings that people show in poems are often different. They can be sad, happy, excited or afraid, and poets show these feelings in a number of ways. In Nothing's Changed the feeling is of anger and aggravation at the lack of change in racism and separation. Whereas in Night of the Scorpion the feelings are of tension and apprehension as the child worries for its mother. In Nothing's Changed the poet uses repetition of connectives "and" on four lines in stanza 2. This shows growing feelings of anger and adds impact as the stanza commences. It shows his rising anger and the words suggest he has had a hard life and he is becoming trapped and the anger more concentrated, "skin about my bones". ...read more.

This would be terrifying for a child and it adds to the feelings of fear and shows that the child and the adults are afraid of this Scorpion that is still around. The contrasting descriptions of the white peoples inn, "Brash with glass..." 17-32, and the description of the black peoples cafe, "the working man's cafe sells..." 33-40, show the narrator and the poets feelings of resentment and bitterness at the separation between the two groups of people and the unfairness that the black people must eat at the dirty an cheap cafe whilst the white men get to eat at the clean, neat and posh inn. The poet feelings of religion and rituals are shown as critical as in the poem the ceremonial language and the talk of the next life after if the mother dies seems unhelpful to the child as they seem to only be causing her more pain. ...read more.

Violent feelings are also shown at the end of the poem when he says that he wants to "shiver down the glass" of the white peoples inn, 45-47. And concludes on a negative note "Nothing's Changed" as he does not see any difference and still feels separated and angry at the white people. There is no change in the post apartheid world. However in the poem Night of the Scorpion, the poem ends differently to Nothing's Changed. The feeling that the child shows at the end is calmer and more relaxed than the rest of the people as he says After twenty long hours it lost its sting. My mother only said..." The ending is like the child is feeling proud of the mothers bravery and courage and is more relaxed after all the panic that everyone has been through. Ryan Bolton ...read more.