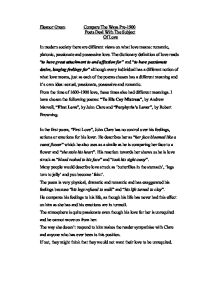 Compare The Ways Pre-1900 Poets Deal With The Subject Of Love.

Eleanor Green Compare The Ways Pre-1900 Poets Deal With The Subject Of Love In modern society there are different views on what love means: romantic, platonic, passionate and possessive love. The dictionary definition of love reads "to have great attachment to and affection for" and "to have passionate desire, longing feelings for" although every individual has a different notion of what love means, just as each of the poems chosen has a different meaning and it's own idea: sexual, passionate, possessive and romantic. From the time of 1600-1900 love, these times also had different meanings. I have chosen the following poems: "To His Coy Mistress", by Andrew Marvell, "First Love", by John Clare and "Porphyria's Lover", by Robert Browning. In the first poem, "First Love", John Clare has no control over his feelings, actions or emotions for his lover. He describes her as "her face bloomed like a sweet flower" which he also uses as a simile as he is comparing her face to a flower and "she stole his heart". ...read more.

He says that if he had all the time in the world he would spend thousands of years complimenting her, but of course he cannot. His love would be described as passionate, physical and sexual in the way he tries to seduce her and praises parts of her body. Marvell also uses satire as the poem in that time, would have been used after a meal for gentlemen's entertainment after a meal, where he jokes about "worms shall try that long preserved virginity and your quaint honour turn to dust" as though when she is dead the worms shall see your body and her beauty will be gone. "Porphyria's Lover" suggests coldness especially in the beginning where it starts off with the "rain set early in to-night". This contrasts with "First Love"s "I was ne'er so struck before that hour with love so sudden and so sweet". However, Porphyria "glides" in suddenly and this makes the atmosphere warm as she "shut the cold out and the storm". ...read more.

John Clare could not have his heart back; it was unrequited love whereas "To His Coy Mistress" was quite sexual and physical. Andrew Marvell was very persuasive and convincing in his attempts to seduce her and fails. "Porphyria's Lover" illustrates possessiveness and jealously. Robert Browning took his 'passionate desire' too far and killed his lover as his jealousy took over him. They all treat women very differently, in ways that women in today's world would find praising women's body parts and ignoring women might be unacceptable. The lead women in the poems show themselves to be seductive, disdainful and reserved. Eleanor Green The role of the male in each situation is very different. Robert Browning wanted to own his lover, or 'control' her, and rather than risk losing his love, he kills her. John Clare deeply regretted such a setback of his emotions and looked on helplessly. Andrew Marvell, rather than seduce his mistress gradually, expects an instant reaction to his lust. There is a different type of love in each poem and different types of solutions to resolve their love. ...read more.