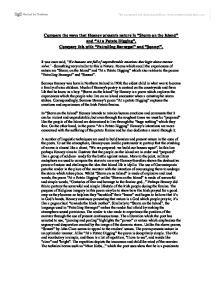 Compare the ways that Heaney presents nature in Storm on the Island and At a Potato Digging. Compare this with Patrolling Barnegat and Sonnet.

Compare the ways that Heaney presents nature in "Storm on the Island" and "At a Potato Digging". Compare this with "Patrolling Barnegat" and "Sonnet". It was once said, 'We humans are full of unpredictable emotions that logic alone cannot solve.' -Something very similar to this is Nature. Poems which recall the experiences of nature are "Storm, on the Island" and "At a Potato Digging" which also relates to the poems "Patrolling Barnegat" and "Sonnet". Seamus Heaney was born in Northern Ireland in 1939, the eldest child in what was to become a family of nine children. Much of Heaney's poetry is centred on the countryside and farm life that he knew as a boy. "Storm on the Island" by Heaney is a poem which explores the experiences which the people who live on an island encounter when a catastrophic storm strikes. Correspondingly, Seamus Heaney's poem "At a potato Digging" captures the emotions and experiences of the Irish Potato famine. ...read more.

More to the point, military metaphors are used to compare the storm to an army Heaney therefore shows the destructive power of nature and challenges the idea that Island life is idyllic. The use of Onomatopoeia puts the reader in the place of the narrator with the intention of encouraging them to undergo the storm which takes place. Whilst "Storm on an Island" is made of explosive and loud words, the poem "At a Potato Digging" unlike "Storm on the Island" is made of sorrowful and simple words, "Centuries of fear and homage to the famine god..." Perhaps Heaney did this to portray the sorrowful and simple lifestyle of the Irish people during the famine. The purpose of Religious imagery in this poem may be to show how the Irish prayed for a good crop as they became so helpless they "humbled" their "knees" and began to believe that it's in God's hands. ...read more.

In the same way as "Storm on the Island" and "Patrolling Barnegat" this poem too, however Clare conveys a calm and untroubled face of nature. The structure of the poem "Storm on the Island" consists of enjambment to convey the desperation. This also helps the reader learn that nature can flows like the sea, or become "a tame cat turned savage". The whole poem is written in one long stanza possibly to take the shape of the vigorous crashing of waves continuously pushing back and forth. Conversely, in the poem "At a Potato Digging" the structure is made of five sections: the farmer working 'today' (the present), then the description of the potatoes itself, followed by the famine which hit Ireland in 1845-1850, the suffering, and finally when there's plenty of food. The rhyme scheme- ABAB in the poem make the poem rhythmic: the rhythm of how remorselessly the farmers worked. That fact that the poem has been written in the style of a ballad instantly shows there is a moral which Heaney intends to put forward. ...read more.

This response addresses a wide range of poetic and linguistic devices the poets use in order to present nature. The two poems give to this candidate are Seamus Heaney's 'Storm on the Island' and 'At a Potato Digging', with the ...

This response addresses a wide range of poetic and linguistic devices the poets use in order to present nature. The two poems give to this candidate are Seamus Heaney's 'Storm on the Island' and 'At a Potato Digging', with the option to compare with any two other poems from the Anthology. The candidate has opted for 'Sonnet' by John Clare and 'Patrolling Barnegat' by Walt Whitman - this shows the candidate has a basic understanding of thematic similarities and difference between these for poem, as all four heavily orientate around the theme of nature, with some delving further into how it affects us as humans as well as how we rely on it for agricultural means and for relaxation, depending on what the nature is. The candidate consistently focuses on the poems, though the comparisons are very mixed and are jumbled together with no cohesive structure - a higher ability candidate might dedicate 30 minutes of the 1 hour exam to comparing in detail the first two poems, then 10 minutes on each of the other two in slightly lesser detail (and also making comparisons to the either of first two), leaving 5 minutes at the beginning and end of the exam to plan a proof-read.

The Level of Analysis is wholly representative of what should be expected of a GCSE candidate expecting a middle B grade. Rather than just comment on how each poem speaks of nature, as this is the very obvious link, the candidate delves further into their analysis and speaks of how nature is represented - violently in 'Storm on the Island'; romantically in 'Sonnet', etc. - and then speaks in fair detail of the techniques the poets use in order to achieve this representation. Commenting on the language Heaney uses in 'Storm on the Island' in order to create a violent, threatening force of nature wins the candidate marks for paying close attention to phrase like "spits like a tame cat turned savage". Although, to gain even more marks, the candidate might employ and even deeper approach and comment on the effect of individual words like "spits" and the connotation it hold - offensive, vicious, snake-like" and also the sound of the word; "spit" actually sounds like it's definition, as does "savage"; extremely violent. This kind of analysis is the kind that will win the highest marks and, as 'Storm on the Island' is one of the poems the question prescribes, then this depth of analysis is required (and also in 'At a Potato Digging', being the other prescribed poem) to achieve top marks. Lesser analysis is required for the other two that the candidate chooses.
With regard to the other poems, the candidate's approach to 'At a Potato Digging' shows an excellence contextual knowledge of the Irish Potato Famine and it's involvement in the writing of the poem. Contextual research is like written gold for examiners as it shows a candidate with the ability to conduct external research in order to improve the strength of their analyses. However, the candidate missed a big trick in that 'Sonnet' is the only poem of the for that, for the entire poem, describes nature as something beautiful. Though all the poems subtly suggest nature is something to be admired (the brute force of the "demonic" waves in 'Patrolling Barnegat'; the "huge nothing" of 'Storm on the Island'; the "centuries of fear" in 'At a Potato Digging"), 'Sonnet is the only one that speaks of an admiration of nature because of it's beauty. This was only briefly touched upon toward the centre-end of the essay and the link could've been made stronger. In doing this, the candidate might also have commented on how, by using sonnet form (fourteen unbroken lines and decasyllabic rhythm in iambic pentameter), he creates a deeply romantic connection to nature, with sonnets being the typical form of poems of extremely intense emotion - the very fixed, unrelenting rhythm and the block of fourteen lines makes his emotions just as intense and those felt on the other poems, so candidates should be wary of saying that the poem is more calm, because whilst there is no threat of death or famine, the poet's emotions are still very high.

The Quality of Written Communication is average. Quite frequently the candidate makes spelling mistakes that could easily be rectified with a single proof-read. There are a few instance where grammatical inconsistencies such as "the Irish prayed for a good crop as they became so helpless they Ã¢â‚¬Å“humbledÃ¢â‚¬Â their Ã¢â‚¬Å“kneesÃ¢â‚¬Â and began to believe that itÃ¢â‚¬â„¢s in GodÃ¢â‚¬â„¢s hands" whereby a few commas would help clarify the meaning of the sentence, and there is a limited use of punctuation. In order to achieve the highest band of marks, candidates must write confidently; using a powerful range of vocabulary and an astute use of more complex punctuation like colon, semi-colons and parentheses.